Monday Motivation: Corona-time has lessons for our writing 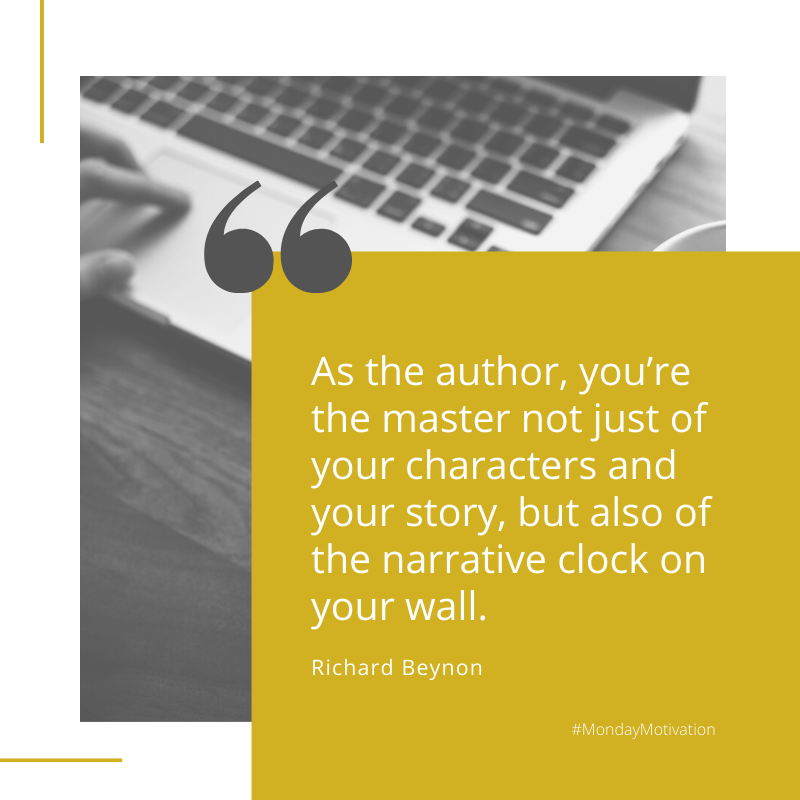 Corona has narrowed our focus, as I noted last week – but it has also slowed us down. As events have speeded up, so our subjective experience of them has slowed glacially. We keep reminding ourselves that a week of corona-time feels like months of lived time.

Which brings me to this week’s theme.

Time, which seems to be the current on which, willy nilly, we’re all carried along, is in fact the most malleable of dimensions. In life, it seems, as coronavirus has so clearly demonstrated, it can stretch and contract. In writing, time is entirely under our control. We can cause our fictional clocks to speed forward years at a time, or we can slow them down so that a single second of “real” time takes pages to pass.

For three weeks, Alexander contemplated the meaninglessness of life. And then one morning, sitting on his balcony, his eye caught sight of Amy passing oblivious along the pavement below him, her red hair a halo about her head. For a moment, he considered calling out to her, but the complications that could ensue were so obvious even to him that he hesitated. Between one of her steps and the next, as her hair rose and then fell, the choices available to him seemed to hover in the air before him…

And so on. Three weeks pass in a flash – and then a moment is caught as if in amber, and turned this way and that for us to consider all its throbbing, complex implications. A page or more might pass in this way while the writer anatomises a second of felt experience.

I’ve just embarked on a very corona-like project with a very few close family members: we’re to read and ponder Tolstoy’s Anna Karenina, which I last read many, many years ago.  What is immediately striking about the first few chapters of Anna is the leisurely pace at which Tolstoy unfolds the opening stanzas of his story; the long, deliberative analyses of his major characters who’re presented in all their contradictory moral complexity.

In an early chapter, for instance, Prince Stepan Arkadyevitch Oblonsky, who’s been caught by his wife having an affair with the children’s governess, is being tended to by his valet, Matvey, while he attends to a telegram and is being prepared for the day by his barber: ‘“Matvey,”’ writes Tolstoy, ‘”my sister Anna Arkadyevna will be here tomorrow,” he said, checking for a minute the sleek, plump hand of the barber, cutting a pink path through his long, curly whiskers

‘“Thank God!” said Matvey, showing by this response that he, like his master, realized the significance of this arrival – that is, that Anna Arkadyevna, the sister he was so fond of, might bring about a reconciliation between husband and wife.’

The conversation between prince and valet continues, with pauses made necessary by the ministrations of the barber (‘Stepan Arkadyevitch could not answer, as the barber was at work on his upper lip, and he raised one finger…’), and explorations of the prince’s thoughts and ruminations.

I’m fond of quoting John Banville who, in a BBC interview some years ago, said, “You can’t write hotly about hot things. You have to write very coolly.”

It’s equally true, that when you’re writing about complex people, and complex moral situations, and complex emotions, you need to slow time down. It gives us, your readers, a chance to absorb all the nuances of the situation you’re depicting.

Paradoxically, when you’re describing hectic action, although you might change the pace of your writing – short, sharp words; staccato sentences – it’s also wise to slow time down. A good description of a fight which, in life might take seconds, can take pages of a thriller.

As the author, you’re the master not just of your characters and your story, but also of the narrative clock on your wall.

Read Jo-Anne’s latest blog: ‘Writing Secrets: Your writing is as good as your last sentence‘