Monday Motivation: Lest we take ourselves too seriously

By Richard Beynon
Posted May 4, 2020
In Monday Motivation, Richard Beynon's blog
Monday Motivation: Lest we take ourselves too seriously  2020-05-042020-04-30https://allaboutwritingcourses.com/wp-content/uploads/2016/12/final_logo_small.pngAll About Writing Courseshttps://allaboutwritingcourses.com/wp-content/uploads/2020/02/2020-banners-2-16.png200px200px
0 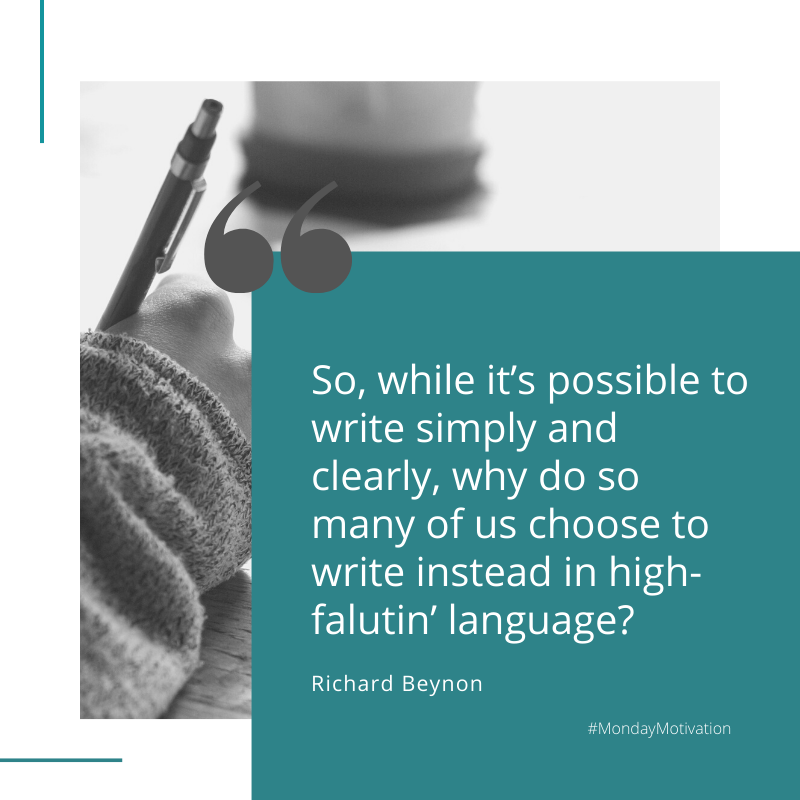 Think for a moment of some of the most memorable sentences in literature.  “Happy families are all alike; every unhappy family is unhappy in its own way”; or “It is a truth universally acknowledged, that a single man in possession of a good fortune, must be in want of a wife”; or “To be or not to be, that is the question”; or “All we have to decide is what to do with the time that is given us.”

These sentences are all characterised by their sheer clarity. Although each expresses what is, upon examination, an important, indeed, an existential, thought – they use the language of everyday, in clear and honest declarative statements, that are instantly accessible to any literate adult.

So, while it’s possible to write simply and clearly, why do so many of us choose to write instead in high-falutin’ language? The answer’s simple: we’re afraid of seeming stupid and ignorant, not to mention uneducated, unsophisticated and generally unpolished.

I knew a man who spoke in such abstract terms that I was convinced that my failure to follow him was my fault, a sign of my own limitations. I thought that I’d probably not paid enough attention in my philosophy classes – actually, I knew I hadn’t – or, much worse, that his IQ was simply so far ahead of mine that he outclassed me in brainpower.

But over the course of several dinner parties in his company, I began slowly to realise that he was wielding his language and his references to the great French post-modernists in order not to communicate but to impress. And it had worked – at least to begin with.

The novelist John Irving has noted that “if the work is tortured and a ghastly effort to read, it must be serious,” while “if the work is lucid and sharp and the narative flows like water, we should suspect the work of being simplistic, as light and as lacking in seriousness as fluff.”

I’ve been reading a book by Suzanne McConnell, called Pity the Reader. She studied under Kurt Vonnegut at Iowa State where he taught creative writing for many years, and she has produced this volume that is a showcase of his teaching. It is excellent.

Much of Vonnegut’s advice to writers consists of exhortations to write more simply, to avoid bombast, and abjure pretension. If you’re puzzled by the title of the book, Vonnegut himself provides an explanation:

Readers, he says “have to identify thousands of little marks on paper, and make sense of them immediately. They have to read, an art so difficult that most people don’t really master it even after having studied it all through grade school and high school – twelve long years.”

Pity the readers, he advises. “Our audience,” our readers, that is, “requires us to be sympathetic teachers, ever willing to simplify and clarify.”

My friend, the one who bamboozled me with Foucault and Derrida, and one-sided conversations studded with obscure cultural references, all uttered in a tone of utter confidence, had discovered that opaqueness impresses – until it’s revealed as the gobbledegook it really is.

We seldom meet these days, and my responses to his occasional emails are half-hearted.

P.S. Here’s a reminder of what totally obscure, opaque writing can look like. I’ve cheated by taking this from an academic book (academics are, alas, particularly prone to over-inflated, difficult-to-fathom, writing) published some years ago by Stanford University Press. I’m going to quote just one sentence, but it gives you a very good idea of what the whole is like:

“It is the moment of non-construction, disclosing the absentation of actuality from the concept in part through its invitation to emphasize, in reading, the helplessness – rather than the will to power – of its fall into conceptuality.”

From Paul Fry’s A Defense of Poetry

Free Webinar on improving your creative writing skills: 6 May

30-Day Hike Through Writing Country: Start when it suits you (on 30% discount)