For our April/May flash fiction challenge, if you recall, we asked you to rewrite a favourite fairytale, place it in a modern setting, and imagine it from the perspective not of the traditional Hero, but of one of the other characters.

True to form, you came up with a huge variety of interpretations, many of them amusing, all of them worth reading. But again, as usual, we had to seek out the first among equals.

The laurels go to Shirlaine Douglas for her energetic rewrite of the Aladdin story, written from the perspective of the sly and arrogant djinn. Congratulations, Shirlaine!  You win a literary assessment of 5 000 words valued at R2 750 – which you can also, as you know, use as part or full payment on one of our courses.

The runners up, in no particular order, are:

Dimitri Roussopoulos for his amusing mashup of a number of different tales;  Shui Hoppy for their up-to-the-minute tale of lockdown and a very stern Rapunzel;  Nikki Brooke for her Me-Too take on Snow White and a creepy Prince;  Colleen Saunders for her SW and the Seven Opportunistic Dwarves; and finally Sal Carter for her appreciative portrait of a randy granny in her version of LRRH.

Read the winning entries below, and click here to check out our free-to-enter June/July Flash Fiction Challenge, currently open for entries!

“I’m Asmodeus,” I thundered, “Breaker of Ties, Shape-shifter, Master of Seas. Yet you play tricks with me?”

I wrapped myself in cold flames, but Aladdin stood his ground.

“You cannot increase wishes boy, now greed has devoured your first,” I said.

Aladdin closed his eyes. Ragged tunic, knees like a camel, and yet, here I am, at his mercy. Not for long. This one thinks too much of his cleverness.

His face grew triumphant. “My second wish is to know the exact wish that will grant all of my desires. “

“Tell me then, so I may satisfy you?”

“One thousand dinars, a princess and a prosperous kingdom to rule,“ he said.

“Is that all?” I sneered. “I could create that each day for a millennium and it’d be but sand. Your dreams are so… human.”

Aladdin’s eyes grew round as moons. “What do Jinni dream of?”

I revealed to him then the magnificent City of Brass, its golden arches, gardens of jeweled trees and clear running water. I showed him the Towers of Heaven inlaid with rubies and cavernous halls with ivory couches, cushions of silk and all manner of delicate sweets. Then I showed him the concubines.

Aladdin was trembling. “I desire that.”

I poured scorn over him. “You’re no Jinn boy. Only a puny human.”

His eyes became slits. “My final wish, Demon,” Aladdin said, “is for us to trade places.“

I stoppered the lamp. It felt good to stretch my legs again, even these puny ones.

High in a tower, far away from cities and bustling throngs of people, lived a beautiful social media personality. In utter isolation, she maintained entire lack of contact with other people.

Elsewhere, a young fan took note of her quarantine, and took it upon himself to rescue her. Astride his trusty swivel chair, he hacked and tracked until he had located the tower that held her.

Upon arriving, he cried her name, saying “Rapunzel, Rapunzel, I seek to free you from this stone prison. Allow me to ascend”

“But I have no rope to let down,” she replied.

The fan thought long and hard over his options, then called back, “you’ve been up there so long. When last have you been to your hairdresser?”

“Not since I’ve been here,” said she. “My hair is so long, you could practically use it to… Oh, I see what you mean.”

And so the fan ascended up her billowing tresses. Upon arriving at the top, he pouted his lips in expectation of a kiss as a reward for his efforts. Rapunzel gently placed her hand on her hero’s chest. And pushed.

Down he fell to his untimely demise, an unfortunate end to a valiant effort. With his final breath, he begged his love to tell him why she had betrayed him.

“Oh, it was quite lovely of you to attempt to rescue me. But next time, don’t expect to enter without a facemask.”

The trees around him rose into the cold night sky like the hairs on a cat’s spine. There were no cats here, though. He’d seen to that when the rats had taken this mountain. The only cats left were now curled beside the glowing hearths and steaming vents in the small town so far below him. His wiry frame slipped from shadow to shadow, nose to the ground as he followed the scent of the rats along the frost-covered trail. His paws hurt and his injured hip had been plaguing him more than he’d anticipated but he was almost there. Having come so deep into the rats’ territory, neither the burning in his haunches, nor the gnawing in his belly would stop him. His time had come. Nearby, something shifted in the undergrowth. Anyone else may have mistaken it for the icy breeze shifting dead leaves. But he knew better. It was the rats. They’d been watching him since he had crossed their border. By now, the decrepit old queen knew he was on his way. Perhaps she remembered it was to claim his payment. Perhaps not. Nevertheless, they were in his debt, and soon, a dark tide of matted fur, and glittering eyes would pour down the mountainside, over the silently swaying fields, and into the sleeping houses of Hamelin. There it was again, but closer this time. He stopped. “Over here, wolf,” said a voice from the frozen remains of a wild rose bush. “She’s waiting for you.”

She appeared so serene. Her eyelashes rested gently on her cheeks, not fluttering or moving, completely peaceful. Her full lips were relaxed and slightly open; her breath was soft and even.

Philip noticed her beauty instantly, even from afar. He rode over to her as soon as he saw her, not wanting to waste another second of his life without her.

But she did not wake when he approached, nor when he dismounted and knelt beside her.

He stared at her while she slept, drinking in all her beauty. Her blonde hair was slightly curled with a tiara decorating her brow. She was dressed elegantly in a shimmering gown.

‘She’s perfect,’ Philip whispered. He wished she would look upon him with love and desire.

What was her name? Why was she here all alone? Where did she come from? There were so many unanswerable questions. But the most important was: what should he do now?

He thought of moving her or seeking help. But he couldn’t stop staring at her lips. Just one kiss wouldn’t hurt. No one would know.

He leant forward and pushed his lips against hers.

Another girl wearing a pink t-shirt imprinted with ‘Aurora’s Hens Party’ rushed towards him yelling and screaming. Philip backed away instantly, riding off on his motorbike.

‘Yeah, get lost! You sleazy creep!’ the girl yelled, before helping the bride-to-be off the ground.

The Seven Dwarves by Colleen Saunders:

Far away, in a little cottage deep in the forest lived seven dwarves. Far from nosey social workers and pesky evangelists who condemned their lifestyle, the dwarves were happy in their isolation. Until one day, on their front stoep appeared a young girl. “Clearly anaemic,” observed Doc, for her skin was white as snow.

“I’ve come to help you,” the girl declared. Without a by-your-leave or a may-I, she was inside, sweeping and dusting everywhere, causing loud ‘Aa-chooo!’s from Sneezy. But it was when she started questioning their sleeping arrangement that they knew it was time for action. Happy waved down a passing deer. “Hasten to the witch’s house,” he whooped gaily. “Tell her we have another one for her, and to bring her reddest apple”.

In no time the witch was at their house with a large juicy apple. Dopey stared open-mouthed as the girl grabbed the apple, took a bite, and crumpled to the ground. They were just about to hand her to the witch to be carried to her lair when the sound of hoof-beats arrested them. “Oh, that infernal prince,” snarled Grumpy, while Bashful watched appraisingly from behind the curtain. The prince wasted no time in gathering the girl onto his steed and galloping off through the sward. Disappointed, the witch said goodbye, making the dwarves promise she’d get the next one.

The dwarves woke Sleepy and told him the whole story before toasting their return to normalcy with a pitcher of ale.

“Charlotte please take this quiche to Gran for me.” Crickey can’t she see I’m watching a movie.

“Just go. Use your skateboard and the back roads.”

I loved Gran, she was fun; swore like a trouper, drank too much. I put on my red hoodie and rucksack, headed for the deserted streets.

No sign of Gran, I tiptoed to her bedroom to surprise her. The face that peered over the sheets had whiskers. “Where’s my Gran?” I gulped.

The creature rubbed his hands together and narrowed his bright blue eyes. “I ate her.”

“What?” I backed away. He threw back his head and cackled loudly. “Don’t be silly, she’s just gone for a pee.”

Gran emerged from the bathroom, stark naked. “Shit,” she covered her droopy boobs with her arms and flung herself onto the bed.

“Gran…. The coronavirus and all?” was all I could think of to say.

“He’s an old friend and we were both sick of being alone. Beat it sweetie pie, and if you tell your mother I’ll fucking skin you alive. Love you.”

That was my gran for you. I retrieved my skateboard and headed for the park. I’d give the quiche to the friendly old boomelaar who lived there. He was nowhere in sight. Suddenly I realized why that face above the sheets was familiar.

Surely Gran should not be having sex – she was over sixty damnit. 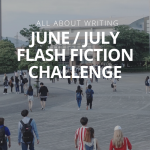