Monday Motivation: Skip the conclusion and flatter your readers 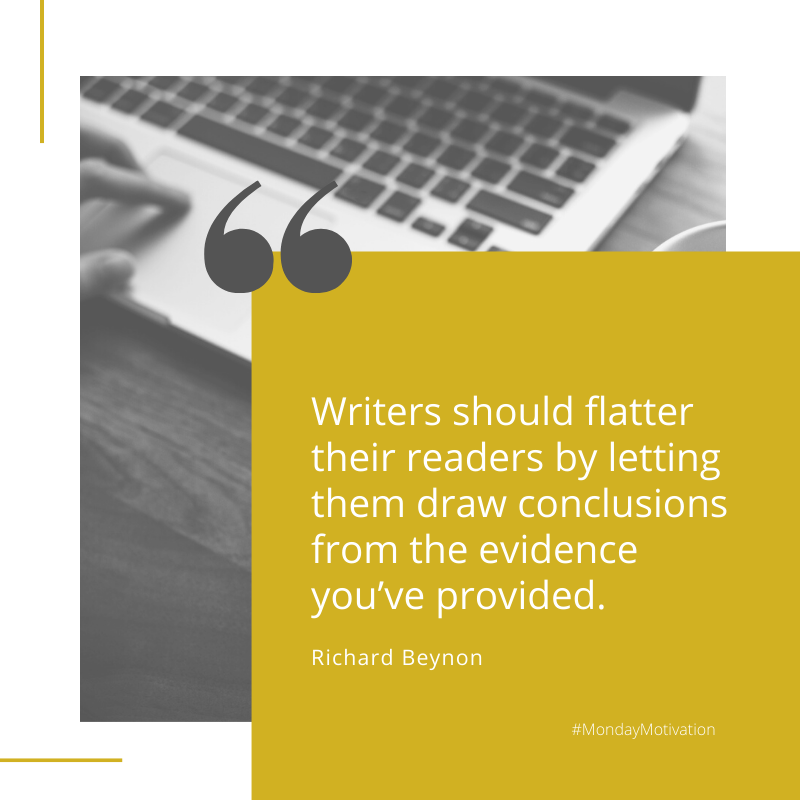 Billy Wilder was one of Hollywood’s great writer-directors. He was responsible for such evergreens as Some Like it Hot, Double Indemnity, Sunset Boulevard and many, many others. Towards the end of his career he presented a number of seminars in which he confided some of the lessons he’d learned over a lifetime in the movies.

I was reading a compendium of Wilder’s advice recently. One of his recommendations struck me because it’s so similar to a tactic I’ve often recommended to writers working on short stories or novels.

This is what I say: Writers should flatter their readers by letting them draw conclusions from the evidence you’ve provided. Take a well-worn syllogism, as an example.

All Greeks are liars, goes the classic formulation. Plato is a Greek. Therefore, Plato is a liar. There’s no gainsaying the logic of this, of course – but it is a tad, shall we say, on the nose, a wee bit predictable.

So, what if, instead of spelling out the rather obvious conclusion, you said something like this. All Greeks are liars. Plato is a Greek. I hope he doesn’t have to make a sworn deposition any time soon.

Now your reader has to do just a little work. He has to puzzle out why I raised the question of depositions. Well, because it’s a crime to lie in a deposition which entails the giving of sworn evidence. So if Plato is a liar, then it’s feasible that he’ll lie in the deposition and could find himself in all sorts of trouble.

So how does Wilder make the same point? He says: “Let the audience add up two plus two. They’ll love you forever.” Actually, he attributes the advice to Ernst Lubitsch, another famed Hollywood director, who was a master of the oblique reveal.

Wilder gave this example of what was generally called “the Lubitsch touch”:

The scenario (drawn from Lubitsch’s The Merry Widow) is as follows. The king is a fat and jolly fellow who has a young and frisky bride. Unknown to the king, she is having an affair with a lieutenant of the King’s Guard. The question is: how do you reveal this to the audience – and the king? This is how Lubitsch did it in his movie.

First he has a lovey-dovey scene between king and wife as he gets dressed in the morning. The king leaves his bedroom, passing the uniformed lieutenant on guard outside the door, complete with his sword. No sooner has the king started to descend the long staircase than the lieutenant enters the room. The king then realises that he’s left something behind, and he returns to his room. The door closes on him, leaving us to imagine his discovery of the lovers in flagrante within. The camera lingers on the closed door. But then to our surprise, the king emerges with a sword belt and sword in hand. This clearly is what he’d left behind. He now tries to put the belt around his corpulent waist, but alas it is much too short.

And we conclude, with the king, that… Plato is a liar.

Read Jo-Anne’s latest blog: ‘Writing Secrets: Whose story is it?‘