Monday Motivation: The love affairs we have with books

By Richard Beynon
Posted August 17, 2020
In Monday Motivation, Richard Beynon's blog
Monday Motivation: The love affairs we have with books2020-08-172022-05-23https://allaboutwritingcourses.com/wp-content/uploads/2016/12/final_logo_small.pngAll About Writing Courseshttps://allaboutwritingcourses.com/wp-content/uploads/2020/02/2020-banners-2-16.png200px200px
0 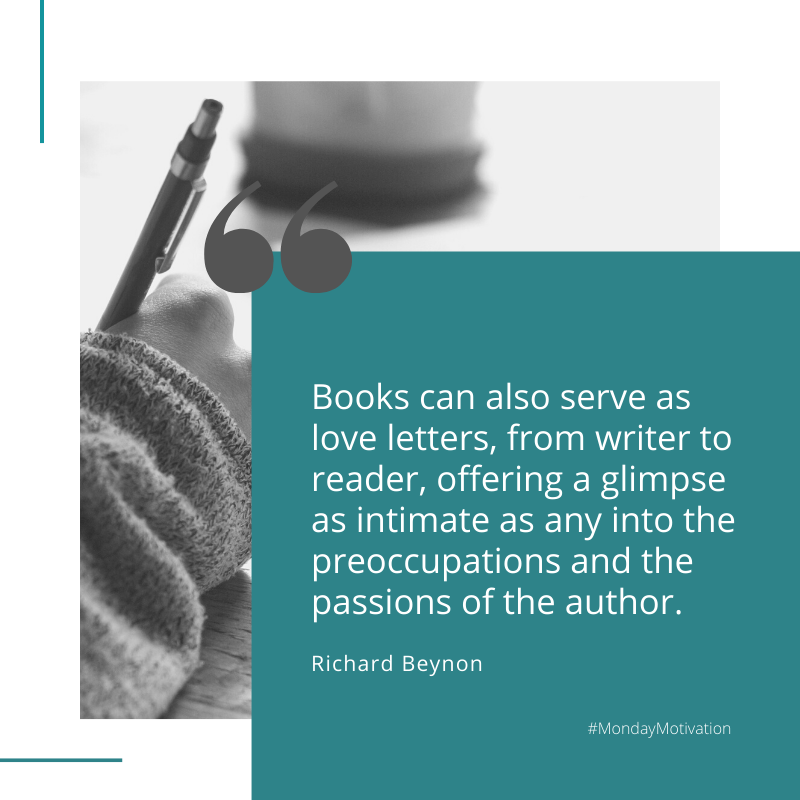 I’ve always been fascinated by the relationship that springs into being whenever a reader picks up a book, opens it and begins the journey to which it is an invitation. Of course, this relationship can take many forms. For some readers, the book is simply a means to an end: four hours of escape; three hours of titillation; a few minutes of arousal.

But books can also serve as love letters, from writer to reader, offering a glimpse as intimate as any into the preoccupations and the passions of the author.

And then there are those books which introduce you to characters larger than life and twice as immediate; which endear themselves to you through the personality and voice of the narrator.

I’ve just read Charles Portis’s True Grit. I’d seen the movie – or should I say movies: first the version directed by Henry Hathaway and starring John Wayne as US Marshal Rooster Cogburn; and then the Coen brothers’ film of 2010 in which Hailey Steinfeld starred – and earned herself an Oscar nomination for best supporting actress.

I hadn’t realized the movies had been based on a book until I came across an essay Donna Tartt had written about it – and which forms the forward to a new edition of the book. Allow me to quote from it:

“It’s a commonplace to say that we ‘love’ a book, but when we say it we really mean all sorts of things… (T)here are books that we love so much that we read them every year or two, and know passages of them by heart; that cheer us when we’re sick or sad and never fail to amuse us when we take them up at random; that we press on all our friends and acquaintances; and to which we return again and again with undimmed enthusiasm over the course of a lifetime.”

I think that even in the opening paragraph of the story you can see what so captured the heart of Donna Tartt:

“People do not give it credence that a fourteen-year-old girl could leave home and go off in the wintertime to avenge her father’s blood but it did not seem strange then, although I will say it did not happen every day. I was just fourteen years of age when a coward going by the name of Tom Chaney shot my father down in Fort Smith, Arkansas, and robbed him of his life and horse and $150 in cash money plus two California gold pieces that he carried in his trouser band.”

Mattie Ross, one of the least compromising narrators in existence, stern and unforgiving, sets out to avenge her father’s death. Recognising that she is too young to act alone, she approaches the sheriff of Fort Smith to name the most effective marshal he knows:

“The sheriff thought on it a minute. He said: ‘I would have to weigh that proposition. There is near about two hundred of them. I reckon William Waters is the best tracker. He is a half-breed Comanche and it is something to see, watching him cut for sign. The meanest one is Rooster Cogburn. He is a pitiless man, double-tough, and fear don’t enter into his thinking. He loves to pull a cork. Now L.T.Quinn, he brings his prisoners in alive. He may let one get by now and then but he believes even the worst of men is entitled to a fair shake. Also the court does not pay any fees for dead men. Quinn is a good peace officer and a lay preacher to boot. He will not plant evidence or abuse a prisoner. He is straight as a string. Yes, I will say that Quinn is about the best they have.’

Do you need more of an invitation than that to join the inimitable, unforgettable Mattie Ross on her quest for justice?