“When I get stuck, I kill a character off”: All About Writing’s Jo-Anne Richards interviews bestselling author Tony Park (Part 2)

I recently spent a delightful hour chatting about all things writing with Tony Park, best-selling author of 18 novels set in Africa, and six non-fiction works. Our virtual Masterclass was set up by our publisher Pan Macmillan.

Last week I shared the salient points he made about his research process, where his ideas come from, how he approaches characters, and more. In today’s instalment, find out about Tony’s advice on writing action scenes, the truth about who he writes for, and his thoughts on characterisation.

We always tell students, it seems counterintuitive, but instead of rushing through action scenes, you should slow down and carry the reader through the details so that they experience it second by second. How do you approach pacey scenes and go about writing them?

I probably put more thought into those action-packed vignettes than I do into the whole book. It’s worth just taking a breath and slowing down. The thriller scenes are up there with the kiss scenes and they deserve as much rigour and as much thought.

If you just go in all bam-bam, guns blazing and whatever, people will gloss over a bit. You need to build tension, the ups and downs, the trials and tribulations, the hero overcoming adversity, just like they would over the plot of the whole book. Your pivotal action scenes need as much theme and structure as your whole story. It’s about pace, but not too pacey, it’s about detail but not too much detail.

How do you make sure that your ending resonates in the mind of a reader and that they carry that away with them?

I probably spend disproportionately more time on the ending when I’m writing. When I go back and do the edit and second read-through, more often than not I’m spending more time on the beginning. They’re the two most important places.

What I’ve found I’ve been doing lately is, I write my book, I make it up as I go along, I go through ups and downs, I get to the end, I write furiously, I think, how on earth am I going to end this thing? So then what I do is, I go back and I do my first edit, right up until the point where I stopped. Then I give it to my wife. She’s my first reader. And while she’s reading it, I work on the ending. I can highly recommend having a beta reader, that’s my tip.

How do you push through when a character flounders? (This was a question asked by one of our community members, Frankie)

When I get stuck, I generally either kill a character off, or make them have sex. Push on. That’s my short and simple response.

When you finish a story, are you completely satisfied with what you’ve done, or do you have little niggles? (This question was asked by another community member, Carol)

Once the book is published, I’m too busy working on the next one. I can’t be bothered about that. Have I captured it the way the reader wants to see it? Well, I’m afraid I write for myself.

Every reader will have their own response. If I have entertained myself during the writing phase, and if I’ve learned a little from my editors, I’m happy with that.

Tony Park is the author of 18 novels set in Africa and six non-fiction biographies. Tony has worked as a reporter, a press secretary, a PR consultant and a freelance writer. He also served 34 years in the Australian Army Reserve including six month in Afghanistan in 2002. Tony and his wife divide their time between Sydney and southern Africa where they own a home on the border of the Kruger National Park. 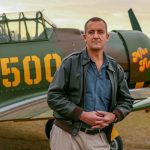 “There are no shortcuts in this business”: All About Writing’s Jo-Anne Richards interviews bestselling Australian author Tony Park (Part 1)Jo-Anne Richard's blog