“There are no shortcuts in this business”: All About Writing’s Jo-Anne Richards interviews bestselling Australian author Tony Park (Part 1)

I recently spent a delightful hour chatting about all things writing with Tony Park, best-selling author of 18 novels set in Africa, and six non-fiction works. Our virtual Masterclass was set up by Pan Macmillan, who publishes both of us.

Tony has worked as a reporter, a press secretary, a PR consultant and a freelance writer. He also served 34 years in the Australian Army Reserve, including six months in Afghanistan in 2002. Tony and his wife divide their time between Sydney and southern Africa, where they own a home on the border of the Kruger National Park. Tony’s 18th novel, Last Survivor, has just been released.

Here are the salient points he made about his research process, where ideas come from, how he approaches characters, and more.

Where does the germ of an idea come from?

I’m editing my book for next year and, in the back of my mind, I’m starting to think about what I’m going to write next. I can’t get too hung up on that. I have to believe that an idea will come from somewhere, because that’s part of the process.

I worked as a journalist for a number years before I wrote my first novel, which I don’t think is necessary for a writer, but there are a couple of things that I took with me from journalism into being a full-time novelist. One of them is knowing a story.

You come across something, you read it, you overhear it at a party or in your workplace, and you get … there’s almost a visceral feeling, for me. It’s almost like a jolt in my fingertips. It energises you and you think, that is the premise of my new book. Learning to listen and turning on your powers of observation are invaluable for any a writer.

We always tell our students, story emerges from who your characters are and what they want. Are characters a starting point for you?

I don’t plot. The first book I wrote, I plotted meticulously. I did all that stuff I was supposed to do, but that book never saw the light of day, because it didn’t work for me. The way I work now is, I just need that idea to start. The next thing that happens is that a person is dropped into the premise.

We advise students to avoid having someone else sweep in and save the day for your main characters. Your characters, particularly your woman characters, are always pro-active. Can you expand a bit on why that’s important in a story?

I like reading books that have a strong female lead in them. You should only write about stuff that you really want to write. Write what you know, sure, but also write the sort of books you like to read.

Can you take us through the process of researching any one of your books?

I have learned a lot by making mistakes. My third book was called African Sky, which was set in Rhodesia (now Zimbabwe) during WWII. I loved every minute of researching it. I immersed myself totally in the research, and of course, probably about 90% of the material I researched and put into the book got cut. I fell into that classic trap of getting caught up in the research and the detail.

There’s so much in writing that’s about balance, whether its description or characterisation. I’m a big fan of Stephen King’s book On Writing. I re-read that book every year before I start a new novel. He says, when it comes to description, a few well-chosen details can stand for the rest, so it’s about getting that balance.

How far can you stretch the truth in fiction?

It’s a tricky one. I think a funny thing happens, sometimes I’ll be writing something, in a thriller, and I’ll think, this is crazy. There’s no way this can happen, this is too far. And then it happens in real life.

Catch the rest of Tony’s answers in next week’s blog post!

Tony Park is the author of 18 novels set in Africa and six non-fiction biographies. Tony has worked as a reporter, a press secretary, a PR consultant and a freelance writer. He also served 34 years in the Australian Army Reserve including six month in Afghanistan in 2002. Tony and his wife divide their time between Sydney and southern Africa where they own a home on the border of the Kruger National Park.

Writing Secrets: Write to seek, not to preachJo-Anne Richard's blog, Tips for Writers 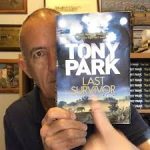 “When I get stuck, I kill a character off”: All About Writing’s Jo-Anne Richards interviews bestselling author Tony Park (Part 2)Jo-Anne Richard's blog, Tips for Writers
Loading Comments...