Writing Secrets: Write to seek, not to preach

Those who are “given the job of telling stories,” according to Italian novelist Elena Ferrante, “should construct fictions that help seek the truth of the human condition”.

I love her for this, because it’s something I believe in and have tried to adhere to, specifically because I grew up in a time of political struggle, when it was thought that writing should “support the cause” and have didactic intent; that it should prescriptively show people the way to go.

And now we’ve entered another period in which the situation around us dictates strictures beyond which artists and writers “ought not to go”.

I have always believed that writers have no special dispensation, no special answers to the great questions. The only thing we can do is explore. Writing, I believe, should be a seeking to understand, not a way of forcing others to believe what we think we already know.

We, at All About Writing, are known for our mantra: Good writing is largely about restraint. But what we mean by it is that good writing leaves things for readers to discern. It doesn’t pre-empt the reader by explaining what characters mean, or what readers ought to think or feel. In this, we are at one with Ferrante, as expressed in a series of her personal musings in The Guardian.

“I like writing that adopts a sort of aesthetics of reticence, writing that suggests, writing that alludes… Reticence is right and good, and certainly effective when what we are silent about is too well known to us and to our readers. It is the application of the old formula: ‘I leave the rest to your imagination.’ And the skill of the writer is best displayed when what she suggests is much more than what she says.”

But her point is that restraint should never stretch to what we can, are willing or permitted to write.

There’s nothing she wouldn’t write about, she says.

“In fact, as soon as I realise that something has flashed through my mind that I would never put in writing, I insist on doing so.

…I write with greater dedication when I start digging into common, I would almost say trite, situations and feelings, and insist on expressing everything that – out of habit, to keep the peace – we tend to be silent about.

Restraint is all wrong if the task of the writing is to sweep away the resistance of the ordinary and look for words that will pull out at least a little of the extraordinary that is concealed in it. What is not suitable to say should, within the limits of the possible, be said.”

It takes courage to go there. Writers have to be brave if they’re to broach the unspoken – or, as she says, the extraordinary within the ordinary. We have to be prepared to irritate and anger people, to make them uncomfortable. We have to be vulnerable on the page, to show what is most shameful and what we would least like other people to know about ourselves.

It’s often through ourselves and those we know well that we can explore the larger issues. And it’s only when we’re prepared to write what should never be written, and explore where no-one has been willing or “permitted” to go before, that we can attempt to understand the human condition.

Perhaps we will never reach an understanding. But it’s in the attempt that great art lies.

Today on the blog, Richard Beynon talks the beauty

Not a bad way to start a Saturday work day. Subtex

Join us and a community of fellow writers for a Sa

Today on the blog, Richard Beynon talks how to mak

Today on the blog, Jo-Anne Richards discusses (not 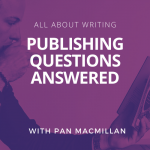 Pan Macmillan answers your questions about publishingPublishing, Tips for Writers