By All About Writing
Posted January 13, 2021
In Screenwriting courses
Crash course in (screen)writing excellence starts 18 January2021-01-132021-01-12https://allaboutwritingcourses.com/wp-content/uploads/2016/12/final_logo_small.pngAll About Writing Courseshttps://allaboutwritingcourses.com/wp-content/uploads/2020/11/screenwriting-crash-course-2021-480-x-270.jpg200px200px
0

On 18 January our acclaimed Crash Course in Screenwriting for film and television gets under way. We assume that you’re already at least intensely curious about these visual media. We’ll satisfy that curiosity and arm you with a range of key technical and creative skills.

Writing scripts is not easy. But we can help you, whether the problem you face has to do with thinking visually or writing dialogue – whether it’s about generating ideas or turning an idea into a killer scene.

And if you’re driven simply by a desire to appreciate more deeply this most compelling of modern art forms, then the course will give you that, too.

The course isn’t only for screenwriters, though. Novelists and memoirists can learn a great deal from the particular crafts and storytelling tools we’ll give you – in terms of character development, dialogue and story development.

We’ve called it a crash course because you’ll be driven through two modules a week for five weeks. Our carefully calibrated notes will introduce you to one essential aspect of the craft at a time – and culminate with an assignment to bed down your new understanding. Your two course facilitators will give you comprehensive feedback on every assignment.

Those facilitators are two of the most experienced writers in the country. Michéle Rowe has written scores of television and film scripts, and more recently has written award-winning crime fiction. Richard Beynon, past head writer of local soaps Isidingo, Scandal and Isibaya, has written hundreds of scripts for television, and a number of screenplays, one of which received Emmy nominations for performances by Michael Caine and Sydney Poitier.

This could be the most exhilarating five-week journey of your life. Starting, January 18. Sign up now. 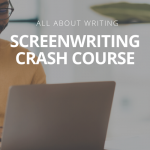