Monday Writing Motivation: I’m a character and I want to get out

By All About Writing
Posted February 15, 2021
In How to write a book, Monday Motivation, Richard Beynon's blog
Monday Writing Motivation: I’m a character and I want to get out2021-02-152021-02-12https://allaboutwritingcourses.com/wp-content/uploads/2016/12/final_logo_small.pngAll About Writing Courseshttps://allaboutwritingcourses.com/wp-content/uploads/2020/02/2020-banners-2-19.png200px200px
2 We meet Alexander musing moodily about the impending dissolution of his marriage. He wonders whether there isn’t any chance of rescuing it. He agonises over the effect of the breakup on the children. Sophie’s just eleven, and will be devastated, he reckons. Pete is more resilient, but even he won’t easily absorb the body blow of his parents’ divorce.

We cut to Eleanor, whose overwhelming sense after being trapped in what for her is a loveless union, is relief. The end of her incarceration with a man who loves her, but whom she can’t love, who suffocates her, is in sight. As she does so often, she’s taken refuge in the summer house, where she celebrates, in solitude, the end of a marriage, the beginning of a life.

Now, there’s lots going on here, in Alexander’s head, in Eleanor’s heart. If we liked, we could also seek out the children: Pete moodily playing a computer game in his room, not thinking much about anything but surviving to another level of Deathsmiles, his new shmup*; Sophie’s on the phone to Kate, involved in a complicated discussion about the ever-shifting hierarchies of who’s in and who’s out at Parkwood Primary.

There’s lots going on – but is anything happening?

I’ve been rereading Robert McKee’s seminal work on story** and came across a little observation I’d like to pass on to you. He begins by saying that what’s important in telling stories on the screen are events. And then he explains why:

“An event is caused by or affects people, thus delineating character; it takes place in a setting, generating image, action, and dialogue; it draws energy from conflict producing emotion in characters and audience alike.”

It’s true that both Pete and Sophie are doing something – but what they’re doing is inconsequential. You could almost say that what they’re up to is just texture: playing computer games, gossiping idly with friends, this is the wallpaper of their lives.

But we’re introduced to Alexander and Eleanor through what’s going on in their heads. Philosophers might talk about the very real existence of mental events – but certainly on the screen and, I’d argue, on the page, a mental event lacks drama. It shows us nothing but that our character is capable of thought.

To explore the drama of Eleanor’s sense of relief, we need to find something for her to do that expresses, in some objective form, her feelings. So instead of putting her in the summerhouse thinking about freedom, give her a pottery studio (it can also be at the bottom of the garden), and have her smash to pieces the shelf-full of unfired pots awaiting their turn in the furnace. This act of vandalism, directed at her own creations, liberates her. Because for fifteen years she’s been making the same boring bloody pots and she’s had enough of them. She wants to do something… different, something grander, something unexpected…

And instead of having Alexander brood about the unavoidable collapse of his marriage, put him in a squash court with his best buddy Dave, and watch him smash the squashball so savagely that he nearly takes Dave’s head off, and when his friend protests, Alexander breaks down, sinks to the floor, and finds himself, humiliatingly, weeping uncontrollably.

Now our two characters, who are each both protagonist and antagonist, are shown to our readers (or if we’re writing a screenplay, to our viewers) doing something, which reveals character. The setting provides us with the opportunity to use detailed observation to add layers of meaning and significance to their actions. In Alexander’s case, at least, you’d have the opportunity to write dialogue, which itself offers you the chance to have your character lie, dissemble, conceal and prevaricate. And of course, the imagery, both on the page and the screen, is vivid and energetic, holding a mirror up to the internal hopes and fears and dreams of your characters.

So if you have a choice – particularly at the start of your narrative, where your first objective should be to draw your reader or viewer in – between writing a scene in which your character thinks, or a scene in which she acts, I don’t believe you should hesitate.

*  I learn a little every day. Today I learned that those “shoot-em-up” video games are refered to as shmups.

**  His book is, appropriately, called Story, with a real mouthful of an explanatory sub-title: Substance, structure, style and the principles of screenwriting. 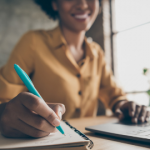 Writing Secrets: Are you writing or procrastinating?How to write a book, Jo-Anne Richard's blog, Tips for Writers