Monday Motivation: We are the word-wielders 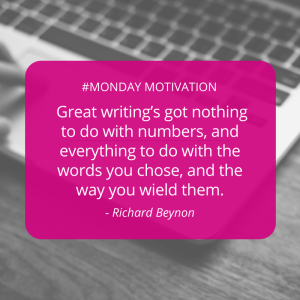 I’m still entangled in the wilds of The Magic Mountain. I learned during a break in my hectic reading schedule that a lexical analysis of the original German version of the book revealed that the 362 000 word magnum opus employed over 36 000 different words. That is astonishing. Shakespeare by contrast used 31,534 words over all his published works.

I take some delight in flourishing rarely used words. Like sesquipedalian; and aeolian; and hamadryad…

I’ve been accused of being a linguistic show-off. Surely not.

But Mann and Shakespeare aside, what is the average human’s active vocabulary? Research tells us: 20 000 words; and our passive vocab adds a further 20 000 to the total.

And yet, when we set about describing a vista of mountains at dusk, we frequently find ourselves using the most exhausted of cliches: the panorama is “beautiful” or “awesome” we write. We might stretch for a metaphor and come up with “the landscape before him was a rhapsody of greys and blues”.

But, as Trump said, we have “the best words” – so the question is, why don’t we use them? Why don’t we dig deeper into that repository when we’re confronted with a landscape and write, perhaps, “one shade of blue merged with another until the last peaks of the chain were indistinguishable from the sky itself, phantoms against the gathering night”? (Or any one of a million alternatives that try to recreate in our reader’s mind these subtle traceries of nature.)

Is it laziness? Or are we so consumed with the ambition to write so many words a day that we neglect to consider the aptness of those words, or the power that, arranged in the right order, they can generate?

And then I remembered Hemingway, and the simplicity of his prose in The Old Man and the Sea.  Back to Google I went and discovered just a few clicks later that in that novella – only 27 000 words long – Hemingway used just 2605 different words.

(And Dr Seuss, famously, only used 50 different words in the composition of that work of genius, Green Eggs and Ham.)

So what conclusions can you draw from all these numbers? That finally great writing’s got nothing to do with numbers, and everything to do with the words you chose, and the way you wield them. 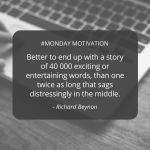 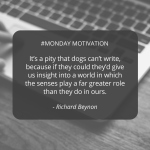