By All About Writing
Posted January 25, 2023
In Newsletters, Writing Challenge
Winners of the October/November Flash Fiction Challenge2023-01-252023-01-25https://allaboutwritingcourses.com/wp-content/uploads/2016/12/final_logo_small.pngAll About Writing Courseshttps://allaboutwritingcourses.com/wp-content/uploads/2022/03/winner.png200px200px
1

For our October/November Writing Challenge we invited you to write a piece of flash fiction in which at first everything seems normal, but then your character starts to realise that things are not quite right. Subtlety, we suggested, should be your watchword.

And subtlety, or the lack of it, was the stumbling block that at least some of you tripped over. The winner, however, finessed the problem by writing, we felt, with just the right degree of obliquity – but not so much that it put the meaning of the piece out of reach.

Jennifer Withers draws on a very old folk tradition for her piece. We found the moment of crisis, when the mother realises the baby she’s holding is not her own, quite, quite chilling. Beautifully done, Jennifer.

First of the runners-up is Patricia Groenwald. Her set up was adroitly handled but we thought that the meaning of her reveal was just a tad too elusive.

Helen Niven inhabited the consciousness of a child in her piece. We’re given intimations of the hammer that’s about to shatter his world – but the child remains in ignorance right until the end.

Angela Martinescu’s entry’s subtlety consists in the absence of something, just as the clue Sherlock Holmes lit on was the dog that didn’t bark in the night.

Ivan Leroy Brown chose to tell his story of death and destruction from the perspective of a honeybee.

And Caroline Harmer’s piece cunningly misled us right up to the quite unexpected twist in the tail.

Congrats to all of you. We’ll be in touch, Jennifer, regarding your prize which is, as usual, either a literary assessment on 5000 words of your writing worth R 2750 / £ 150 or a voucher to the same value to use on one of our courses or programmes.

Thank you to everyone who submitted entries and remember there is still time to enter our December/January Challenge. It is an excellent way to improve your writing.

I held her up over my head, jiggling her a little, her peals of laughter filling the room. I lowered her to my lap, grinning, and touched her soft cheek.

‘Who’s Mama’s girl? Hmm, Who?’ She smiled in response, twisting her chubby fingers in my hair, and giving it a sharp tug. I laughed and disentangled the strands from her grip, setting her down on the couch next to me. I gazed at her, taking in her full face, her perfectly formed mouth. Her right earlobe, a delicate inward fold of flesh since birth. Just a tiny imperfection… my reaching hand froze. I dropped it to my side, confused. Had it been her right ear? I looked at her left. A perfect lobe.

I leaned forward, and blew gently in her face, waiting for her hands to fly up and a giggle to erupt from her throat. She stared at me mutely, her bottom lip trembling a little, on the verge of tears. I embraced her and buried my nose in the crease where her neck met her shoulder, breathing her in. A scent damp and cloying filled my nostrils, like inhaling mud.

I held her away from me, and when she opened her mouth and screamed, I did too.

The sun was warm upon her face. She smiled, her lids closed. She could feel her lashes against her cheeks when she squeezed her eyes closed more tightly. A gentle brush of feathers, it seemed. The greenish hue of the inside of her lids mesmerised her. The colour reminded her of…something. It wasn’t important. The grass at her back was starting to itch. But the sun was so warm, she didn’t want to move. She lifted a shoulder half-heartedly, and the itch subsided to a lesser annoyance. She felt so relaxed, her feet…what shoes was she wearing again? They seemed…harder? Softer? What was the word for a pillow again? That was strange. She knew the word “pillow”. But what did it mean? It wasn’t important. Of course not. But…Laces. That was a word with a meaning. Rope-like. Like the rope that…But no, that wasn’t important. Socks. Yes, socks were important. They protected her feet. Like a pillow. No, that wasn’t right. A pillow couldn’t protect you, could it? Unless you needed a hug and no one was there. Then a pillow protected you. Why was no one there? Her leg jerked as something moved under her knee. She tried to sit up. She tried to open her eyes. She fought to open her eyes. Green. She knew what green meant.

She relaxed. Yes, it was ok. Green wasn’t…Green was life. Green was…happiness.

And then she panicked.

Morning smells. Toast and coffee, my clean shirt. Sometimes eggs. Morning sounds. The snap of the kettle switch. The dog slurping his water. Today there’s eggs. She’s not cooking them the way I like them. The edges are turning brown and curly.

Her eyes are sad. Too sad for cooking.

Toto is standing next to his bowl. It is big and shiny – waiting for water. He has two bowls, the food bowl is smaller, and I have to pick it up when he has finished eating, because he pushes it around the floor. It makes tinny music. Dad calls it noise. Dad also calls him ”that damn dog.” I only ever call him Toto.

Toto is a noisy sleeper. He wriggles and whimpers. Mom says he is dreaming of chasing rabbits. I think I dream as well. I don’t chase rabbits, but I hear noises in the night- cross, loud noises like my teacher when the boys are naughty.

I try not to be naughty, and this isn’t school. The noises confuse me.

Today the sun is shining. I definitely won’t need a jersey, but mom will remind me to take one. I just know it.

Can dad see the sun from behind his newspaper? He puts it down. He is not wearing his glasses. He speaks in someone else’s voice.

”Josh, we have something to tell you,” he says.

The neighbours were arguing again.

Not that Sash is really surprised. The walls of her flat aren’t very thick, and her neighbours were very timeous when it came to airing their grievances (and just as loud in expressing their apologies to one another).

It happened so frequently that Sash could set a clock to it. And did, once, when load shedding reset her microwave timer for the fifth time that week.

Regardless, she knew far too much of their personal life as it was, and resolved to ignore it as she usually did.

Increasing the volume of the radio to give them some semblance of privacy, she pokes her head into the fridge to see if something edible has magically appeared since the last time she’d peered into it. Nope.

Whatever it is, is muffled beneath the music from the radio, but louder than that, a raised voice.

It’s the crescendo to the symphony of this evening’s performance, a way to end the night with a flourish before the enthusiastic love-making, if history is to be believed.

Her eyes are already half-way rolled when she hears the bang.

It rings in her ears over the music, over whatever verbal exchanges are still being made through the wall.

The silence is deafening.

The neighbours aren’t fighting any more.

Good haul, she thought, fanning her wings, alighting from the petals. The food was just where the sisters described. Distance and direction illustrated perfectly through dance. The scouts were rarely incorrect, only sometimes the supply was already exhausted when she arrived. This time there was plenty, an endless field of gorgeous gold – she would return for more. Checking the sun’s position, she began counting down her wingbeats.

Far. Not unusual though, forage grew scanter later in the day, but the return journey would force her to use some of the food as energy. She felt guilty as she consumed a portion of the pollen and nectar she had just harvested. Food the colony depended on. It had a peculiar tang leaving her mandibles tingling numbly. A new food, recently sprouted from an empty field.

Shame, she thought, seeing a sister fall spiraling to the ground. It happened as they became older, flying their wings to tatters gathering sustenance. Not her though, she was young and could forage for days still. Why then were her wings aching? She ingested more sweet nectar, little did it help, she was flagging. Ahead three faltering sisters were scooped up in open beak.

Odd, her sun-eye hadn’t registered the predator’s shadow and seemed to be tracking strange movements from the sun. No, she was spinning. The ground came up fast and she wondered absently if she’d be let into the hive in such a state. No mind, the ants were closing in, mandibles clicking excitedly.

The class had started predictably enough: a new supply teacher (older and more attractive than most but still sport as far as the boys were concerned); the usual skirmishes as they tried to catch her out or make the girls roll their eyes at their pointed questions. ‘Notes on a Scandal’ had always seemed a particularly daring text choice to Tom, given their tender age.  Tom’s partner in bored crime, Rob, unusually had sat up straight when she had walked in and now, Tom suspected, was preparing to go in for a kill.  His hand had shot up.

‘Miss, that part where she first confesses her attraction to her fifteen year old pupil, is it morally or structurally realistic, do you think?’

Tom gawped at him.  This was not his friend’s usual way of creating classroom havoc; nor was it like him to be quite so articulate. The underlying chatter of the class had subsided into an anticipatory silence.

The teacher sighed and eyed Rob with an odd expression that Tom couldn’t quite read.

‘Because, ‘ Rob continued with a staggering conspiratorial wink,  ‘for him to be shagging that old woman…’

Tom gasped and stared open-mouthed at his friend but the teacher surprisingly seemed unfazed.

‘Let’s not use that sort of language here,’ she replied briskly.  ‘As you get older, you will realise that human interactions are complicated, unexpected  and rich. A question to discuss at home, maybe.’

All About Writing
Recommended Posts
Comments 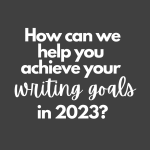 How can we help you achieve your writing goals in 2023?All About Writing, How to write a book, Newsletters