I attended the Kingsmead Book Fair this weekend, until the knives of a stiff winter breeze drove me home.

But I was there long enough to note down a phrase that the moderator of a session I attended* used in her introductions. “The past,” she said, “festers in the present…”

She was talking about corruption during the apartheid era, which continues to infect the body politic today.

But it’s a phrase that set me thinking about the relationship between the past and the present that we explore in fiction.

There’s hardly a narrative that doesn’t rely on a secret from the past – or at least, a wound from the past – ambushing the present.  Ian Rankin’s books are full of these traps, as are Dickens’, and Connelly’s, and… well, almost all of them.

But beyond plot, the past lurks within characters to ensnare them and mislead them.

Of course, if we’re going to think of characters in fiction, then perhaps an excellent place to start is by thinking about the person you know best: yourself.

What dark secret from your past do you possess that you’ve never revealed to anyone? Recently, on one of our courses, one of our students confessed, “I was born with a silver spoon in my mouth – and my life has been one of ease and contentment.”

Life without obstacles is a theoretically desirable state of being – but a life totally without secrets?

I’ve often wondered whether, over the course of my life, I’ve ever sat at a dinner table at which, unbeknownst to the other guests, one silver-tongued, debonair man hugs to himself the knowledge that he has murdered someone – and got away with it. And then, because I’m drawn sometimes to dark conjecture, I wonder whether that secret murderer isn’t… me, and that somehow, having murdered, I managed so successfully to put aside the knowledge of my crime that today I have no memory of it at all.

The point of these idle thoughts is to remind you that your characters, however sunny, also possess a past in which they made choices that they now regret, took decisions that are now cause for shame and guilt, and embarked on adventures that they’d prefer now to tuck away very deep beneath less noxious memories.

I fancy that the man who was born with a silver spoon in his mouth, and who’s lived a life of ease and accomplishment ever since, has a very large portmanteau stuffed with less savoury items. As, I daresay, you have. As, I must say, I do.

Yes, indeed, the past festers in the present, and as writers we should, if not celebrate, then at least acknowledge this – and use it to build characters every bit as complex as the man who once, in a previous life, had murder on his mind. 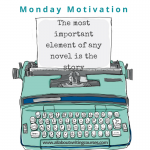 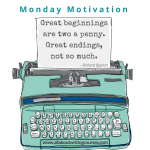