Stephen King said in On Writing that writing a story is a little like digging up a fossil. You spot a fragment of skull protruding from the rock. You carefully disinter that end of the fossil, and work your way delicately down the spine to the pelvis, and thence to the tailbone.

There’s the skeleton of your story. He seemed to suggest that stories exist out there in some kind of Platonic universe – and that it’s our job as writers to disinter and then animate them.

But what if – as fossil hunters will tell you so often happens – you find just the tailbone? The rest of the plesiosaurus has disappeared in the sands of time. You have an ending – but nothing else.

Actually, you should count yourself lucky. Much better to have an end than a beginning. Beginnings, after all, are the easy bits. Most of us have little trouble with a beginning. I’ve known dozens of wannabe screenwriters who have figured out a great beginning to a script. I know I have. Often.

Great beginnings are two a penny. Great endings, not so much.

In Hollywood, the saying goes that you need to spend eighty per cent of your time and energy on working out a good climax to your story.

But if you actually start with a great ending, then it’s much easier to work your way back to the beginning. To imagine what sort of pelvis this strange beast you’ve stumbled on might have had. To sketch in the vertebrae, the rib-cage, the collar-bone, the skull.

Not that any of this is exactly easy. I’m not saying that. What I am suggesting, with William Boyd, by the way, is that “A good ending can redeem a mediocre idea. A bad ending can sink a really good idea.”

It’s a little like reverse engineering a complex product. You work out what it’s made of – and what processes were involved in its manufacture.

With a powerful ending – a shootout at the OK Corral, for instance – you ask yourself, what brought this man to face a bunch of gangsters in what appears to be a deserted town? There are, of course, many possible answers. Some are more productive than others. Those are the ones you interrogate as you slowly work your way back in time to the beginning.

He was speaking about a very different concern, but T.S. Eliot had it right when he wrote “In my end is my beginning.”

How to Write a Screenplay, online – starts 1 June 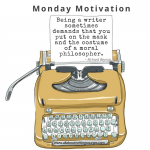