Monday Motivation: How to get unstuck

I spoke a week or two ago about getting stuck in a piece of writing, and having to work out what the problem is before you can push on. That “getting stuck” is a little too generic to be of much assistance, so, with the help of Mary Beard, I thought I’d dig in a little.

Mary Beard is Professor of Classics at Cambridge and has written a number of books about Rome and the Romans. I’ve read one of them, SPQR, which I can attest is a wonderful read, written in an easy conversational tone, completely free of academic jargon, and which is nevertheless hugely informative and stimulating.

She’s currently hard at work on her next book, which concerns the images that have been made of Roman emperors over the ages (as far as I can tell). And she gets stuck and has written about what she believes are the reasons for getting stuck.

Her blog, by the way, is called A Don’s Life. It’s well worth following.  In it she confessed recently to having experienced “three days of repeatedly getting a few lines down on the screen, then either deleting them or transferring them to a separate document rather sweetly entitled ‘bits and pieces’ and starting all over again.

“Writing,” she continues, “is a rum trade. Sometimes it proceeds at a satisfyingly steady, even if not all that speedy, pace… Other times it grinds to a halt.”

Why? Well, she says, “it’s not that there’s anything obviously the matter with the damn paragraph… But you find yourself looking at it with glazed eyes and unable to move on (that I think is the killer: you know that a paragraph is not right if it doesn’t launch you into the next one). So you have another go, then another, then a cup of coffee, then another go, then you see if a glass of wine will help (one sometimes does, two never), and so on.”

She concludes that the reason she most often gets stuck is because she’s “trying to say the wrong thing”. She goes on to illustrate what she means: she’d just written a chapter on a topic that wasn’t central to her subject. Interesting, perhaps, but essentially a detour.

Recognise that? You’re telling a story about a family falling apart. You introduce Uncle Reginald (your protagonist’s brother) and his marriage to the despicable Prunella, and find yourself following their fortunes for page… after page… after page.

The trouble is, Reg and Pru’s story is so interesting. You’re fascinated by the incredible way in which they met, when the two hot air balloons they were travelling in became entangled… And that son of theirs, Horatio!

And before you know it, you’re off at a complete tangent. But entertaining as this detour is, your deep writerly mind is aware that that’s all it is, and slowly you find yourself seizing up. Writing the next paragraph becomes an ordeal. Writing the paragraph after that is nigh impossible. You start panicking. This isn’t the story you started writing! Reg and Pru and the Horatio have hijacked it!

In film and television writing, a trope we frequently use to nudge us back onto the strait and narrow is this: we say that this or that little story thread is too far from “the spine of the story” to justify its existence.

What you as a writer are overwhelmingly interested in is strengthening the spine of your story. That’s where the drama lies, that’s where the characters are most engaged. If the exploits of Reginald, Prunella and their son Horatio, however extraordinary, lead you away from the spine of your story, then it’s likely that you’ll start experiencing the sensation of wading through molasses. (And behind you, if you care to look, the skeleton of your story is listing badly to one side. It seems to have developed a severe case of scoliosis.)

Nobody said that writing wasn’t a ruthless business.

how to get unstuck, Mary Beard, writing and rewriting 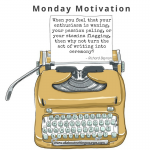