Writing Secrets: How to deal with back story … from a master

By Jo-Anne Richards
Posted October 25, 2017
In Jo-Anne Richard's blog, Tips for Writers
Writing Secrets: How to deal with back story … from a master2017-10-252018-03-19https://allaboutwritingcourses.com/wp-content/uploads/2016/12/final_logo_small.pngAll About Writing Courseshttps://allaboutwritingcourses.com/wp-content/uploads/2017/10/writing-secrets-quote-242f10.png200px200px
2

We’re often asked about that most troublesome of subjects – back story.

It’s easy to tell you what not to do. Don’t include paragraphs of explanation. We don’t need to be told all there is to know about who and what your characters are. Don’t explain or lecture to us.

If you want to lose your readers, that’s the way to do it. It’s more difficult to enumerate, though, the ways in which you can drip-feed enough information into the narrative so your readers understand them and their motivation. And to do it in a natural way.

Here’s a lovely example from Maggie O’Farrell’s This Must be the Place. As soon as I read it, I thought I had to share it with you.

We come in on a character, called Lucas, whom we haven’t met before. He’s busy moving by instinct through the dark garden, allowing his muscle memory to guide him. (If he thinks about it, he’ll stumble.) He rounds the patio, passes the rockery and finally comes upon the black mass of the evergreen tree. He slides behind it, into a space between its branches and the wall.

By this stage, we’re dying to know what he’s doing.

He doesn’t want Maeve to spot the orange glow through the dark. Nicotine is known to inhabit sperm motility and give it two heads or make it go round in circles or something like that. He doesn’t remember, even though she’s told him countless times. It’s just one cigarette, he tells her inside his head. It can’t possibly zap all his spermatozoa. Can it?

He shivers inside his all-weather down coat and draws on the spunk-mutating cigarette, eyeing the neighbours’ house, a slate-covered villa, like theirs. It’s a second-home, of course, as most in the village are, lit up only at weekends. This lot come from London, where the dad works as a banker, and have four children. A shocking, unjust number, really, when you think about it. The mother just seems to pop them out, one after another, her stomach permanently inflated, her breasts constantly being heaved out of her garments in the back garden for some infant or other to nourish itself. Maeve avoids the garden at weekends.

By now, of course, we know. They’re trying for a baby, desperately, intently, and have been for some time. We know this isn’t a recent decision and we know it’s been freighted with heartache.

It’s all wonderfully oblique. She never hits things right on the nose, does she? Notice that she doesn’t mention the “cigarette” until much later. He doesn’t want Maeve to see the orange glow. Nicotine is known to have its nasty way with sperm.

It’s just so much more skilled than simply saying: he wanted a cigarette.

Through the entire passage, she never once mentions their struggle head on. She doesn’t write: They had been trying to have a baby for three years now. They had gone through several rounds of ….

Firstly, Lucas would be unlikely to be thinking that in the moment. He’s thinking about having a cigarette and feeling guilty about it. Secondly, it’s clunky and your reader feels lectured to.

O’Farrell manages to slip it in quite naturally. And through the words she uses to describe the next-door neighbour, we get the added bonus of understanding exactly how he feels about them. Their constant pregnancies are positively indecent, almost animalistic.

And we’ve got all that perfectly naturally, without a thing being spelt out to us. 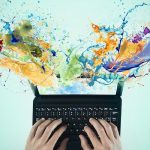 NaNoWriMo – ten tips to write your best storyTips for Writers