Here’s a decision that writers are frequently called on to make. It’s the choice between creating dramatic irony – in terms of which your protagonist remains ignorant of facts of which your reader is aware, and which raises tension – and surprise.  Take this example:

Your character is being stalked by a former lover with a burning desire to snatch him away, a la Fatal Attraction, from his loving wife and doting children. She’s there as he grabs a coffee on his way to work, turning and revealing herself to your reader as he races out of the coffee shop, the takeaway in his hand.  She’s at a nearby table, concealed by a menu and a small arrangement of lilies while he has a business lunch with a fellow attorney. She’s watching while he plays a vigorous game of squash with a friend. More chillingly, she’s in her car across the street when his wife picks up their two young children from school. And she spies on your character as he’s making love to his wife.

Now, you could handle this, structurally, in two very different ways.

On the one hand, you could reserve the information that he’s being stalked for the scene in which she tells him with some relish about her campaign. She might, for instance, reveal that she knows that he has cream but no sugar in his coffee, that he avoids carbs, that he’s a lousy loser at squash, that his children attend the John Smith Junior School, that he enjoys a particular sexual position when making love to his wife… This would send a chill down his spine, there’s no doubt about it, as he learns just how closely she’s been watching him. It would be a powerful scene.

Alternatively, you could intercut each of the scenes I’ve described with scenes of your protagonist trying to mend the damage his affair did to his marriage, pursuing justice in a criminal case, accepting the offer of a full partnership in his law firm, consulting a specialist about the learning difficulties one of the children is having. We become more and more aware, over the course of a chapter or two – or more – of the depth of his ex’s obsession with him. We learn what lengths she’s prepared to go to, what veils on his private life she’s prepared to lift, what secrets betray.

He remains unaware of this throughout – but we, your readers, track with horrified fascination every move she makes.

When she meets him to make her demands known, that he abandon wife and family to join her, it comes as no surprise to us – although as a mighty shock to him.

So which alternative do you choose? The sharp surprise, which delivers a wonderful scene? Or the slow burn, where the stakes rise steadily over a prolonged period, but where you sacrifice the surprise scene?

Of course there’s room for both. But my preference always invariably is to go with the slow burn. It yields much more drama, over many more scenes. It can keep your reader on the edge of her seat for whole chapters. It enables you to tell the other stories – fixing the marriage, advancing his career, fighting for justice – of which your novel is composed. It allows you to raise the stakes, just a little at a time, until the reader’s a quivering wreck, waiting for the ice-pick to fall. 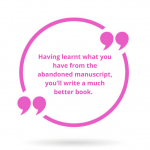 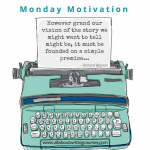