Monday Motivation: Head-hopping should be forbidden

Why is the point of view you choose to write in so critical to the effects you wish to create in your narrative?

The writer’s job, as I’ve said before, is to create characters and a world in such a way as to make it possible for the reader to immerse himself in the fiction so thoroughly that it is as if he were observing events from inside the frame.

There are exceptions to this. Someone who wishes to lampoon the world he’s creating, or to invite us to enjoy the absurdity of existence, might anatomise his world and his characters with clinical and satirical intent. The writer of satirical fiction might choose to maintain some distance between his readers and his creation, to enable the reader the better to appreciate the ludicrousness of human behavior. We don’t empathise with the president who starts a war to distract the nation’s attention from news that he’s just been caught groping Miss Tennessee – we enjoy both his discomfiture and his cynicism: that’s how the world works, we think.

But for the most part, writers want to involve readers in their world and so they encourage us to share the feelings (both the agony and the ecstacy) of their characters. How do they do this? By reducing the distance between us and their characters. By enabling us to relate empathetically with the difficulty their characters experience in making the choices they make, and living with the consequences of those choices.

These thoughts occurred to me while I was reading Red Sparrow, a spy thriller by Jason Matthews (I nearly wrote Jason Bourne). It’s the first of a projected trilogy featuring Dominka Egorov, a Russian undercover operative turned CIA-spy. It’s a big, competent book, written by a former long-time member of the CIA, who knows his tradecraft as well, if not better than another former spy, John le Carre.

The intricacies of betrayal and counter-betrayal; of double- and triple-crossing one’s fatherland; of recruiting agents among the ranks of the enemy – these are all admirably portrayed.

But Matthews makes a fundamental error, in my view, which costs him dearly. Instead of choosing a perspective character and sticking with him for at least the duration of a scene at a time, he skips haphazardly between characters. First we’re in the head of Red Sparrow herself, as she decides whether to betray her country or not; then, a paragraph later, we’re in the head of her lover, a CIA agent, who’s wondering whether she’s ready to be subverted; then, just a paragraph further on, we’re back in her head… And so we go back and forth, leap frogging from perspective to perspective. As we go, we learn what this character’s intentions are; and then what that character plans.

Every character’s agenda is laid bare, all their secret ambitions and fears made known to the reader.

The constant switching of perspective leaves the reader feeling a little giddy. No sooner has one made the adjustment to one perspective, then one is yanked out of that head and plunged into another.

This doesn’t rob the story of suspense, of course (remember what I said last week?) – but it does keep us constantly searching for a steady platform from which to watch the story flying by. It’s a little like those movies shot by a constantly juddering hand-held camera: it’s impossible to focus with any precision on the dramatic issues unfolding before us.

The lesson? Head-hopping should be anathema to writers, because it makes it more difficult for the reader to stay comfortably immersed in the world of their characters.

Creative Writing Coaching Programme: The logic of story: Starts 7 May 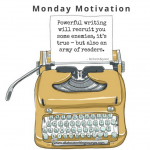 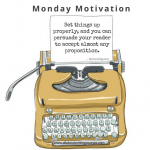