Paul Auster is the author of seventeen novels, the latest of which, 4-3-2-1, was published last year and short-listed for the Man Booker Prize. I bought it back then, but took time to dive into it because I found the prospect of 866 pages of post-modern fiction a little daunting.

It concerns the life of Archie Ferguson – or should I say, the lives. Because the life of the protagonist, a boy who is born and grows up in New Jersey and New York, is presented in four different ways. In this version of his life, Ferguson’s father dies in a fire; in that he is arrested for shoplifting; in a third he dies when lightning strikes a tree he’s taken shelter under, and a branch plummets down on him…

The book explores (among other things) the part that chance and contingency plays in life. This Archie grows up in this way; that Archie realizes a different potential thanks to a small (or a large – think of that fire, and that death) change in his environment.

It’s a thought that often occurs to every one of us: if on that fateful day when I met the person destined to become a life partner; or was offered the job that led me to my first million; or had the idea that utterly changed my life; if on that day instead of turning left, I’d turned right; or missed the train that I’d aimed to catch; or dropped my phone in the toilet and so missed the vital call – then a different universe might hatched, a universe in which my own fate was entirely other from what it might have been…

Now, in every version of his life Archie Ferguson is driven by a desire, no, by an overwhelming hunger to write. One of those versions takes his calling very seriously indeed. Allow me a quote:

“In his three years as a high school student in the New Jersey suburbs, the sixteen-, and seventeen-, and eighteen-year old Ferguson started twenty-seven short stories, finished nineteen of them, and spent no less than one hour every day with what he called his work notebooks, which he filled with various writing exercises he invented for himself in order to stay sharp, dig down and try to get better…”

And this is where at last I get to my point.

Paul Auster has created a character (I assume built very much on a chassis provided by his younger self) who is totally committed not only to writing, but to sharpening and honing his craft. He develops a discipline (that I assume, again, is modeled on what Auster himself contrived in his youth) that might serve other writers hoping to improve their own writing.

Let’s see what exercises he devised for himself.

Well, something simple to start with: “(D)escriptions of physical objects, landscapes, morning skies, human faces, animals, the effect of light on snow, the sound of rain on glass, the smell of burning wood…”

This is starting to sound a little trickier. Try describing a human face. Not easy. The gross differences, not so much: this man sports a beard, that woman has a port-wine mark; he has a scar across his forehead; she has a nose two sizes too large for her petite face…

The subtle differences are more difficult.  You start reaching for slightly more abstract words and phrases: her face had a pinched look, as if she’d suffered privation as a child; his face was florid, as though he made too frequent a habit of holding his breath…

You see what I mean.

And here’s where I think it starts to get really interesting:

“…(M)onologues in the voices of other people in order to become those people or at least try to understand them better.” He names a number of people close to him: father, mother, step-father, girlfriend. But then goes on: “… (B)ut also unknown and more distant others such as J.S. Bach, Franz Kafka, the checkout girl at the local supermarket, the ticket collector on the Erie Lackawanna Railroad, and the bearded panhandler who cadged a dollar from him in Grand Central Station…”

It’s heady stuff. Now, no one’s suggesting that you emulate Archie Ferguson – but the idea of writing exercises that you have devised for yourself is a good one.

Why don’t you try it?

Read Jo-Anne’s latest blog:  ‘Writing Secrets: What do reading and magic carpets have in common?‘ 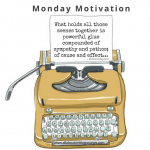 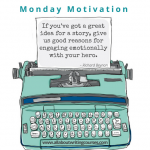