Writing Secrets: It’s not only words which can offend

Someone I know recently had a fall-out with a relative – over words that seemed to her trivial. For a time, she couldn’t understand it at all. After all, what she’d said wasn’t so terrible, was it?

But then she looked harder at the scene in her memory and realised that, as she had uttered the words, she had flicked her wrist, as though brushing away her cousin’s ideas. Just her wrist. She hadn’t used her entire arm, which might have shown greater passion, or indicated that she took his view seriously. She simply gave an indolent flick of the wrist and fingers, which he must have read as the ultimate dismissal of what he had just said.

As I said last week, our brains are always computing. We unconsciously observe, interpret and draw conclusions. We think: Hmm, he’s a little too sure of himself and he’s clearly rather arrogant. She’s a little scornful of him and the story he’s telling her.

There might be nothing in the words themselves which would lead one to think: arrogant. And she might have said nothing at all. But we get it nonetheless.

Start watching people closely – their minute change of expressions; their different body parts and how they use them; the way they stand or sit in relation to other people.

Be specific when you write. Don’t reach for the obvious short-hand cues for emotional reactions: rolling of eyes, groaning, you know the kind of thing.

Just as we’re primed for the significance of expression, gesture and body language in life, so we will be in books, if given the chance to interpret them for ourselves.

Obviously, there’s space for misinterpretation, just as there is in life. I was once trying to direct someone to my university building over the phone, through countless one-way streets. The driver was becoming over-wrought and, since she was bringing a speaker for my class and I felt responsible, so was I.

At a certain stage, I took a deep breath – from nerves, more than anything else – and that was enough for her. She burst into a torrent of abuse: “Don’t you dare sigh at me.”

The more I denied the fact that I was sighing with impatience, the shriller she became: “I heard you sigh. Don’t you tell me you weren’t sighing…”

So, like life, we will interpret these cues, rightly or wrongly, and might later reverse our earlier assumptions. But what a great tool: that very imprecision can work for you.

Think of Ian McEwan’s Atonement. The premise of the book could be said to come down to a great wrong which stemmed from the misinterpretation of body language. 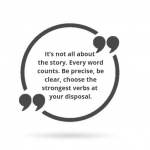 Writing Secrets: If being a writer takes magic, here’s the spellJo-Anne Richard's blog, Tips for Writers 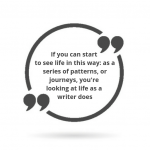