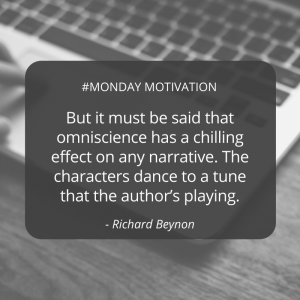 Damon Galgut, we’re all aware by now, has won the 2021 Booker Prize for his novel, The Promise, by a unanimous vote of the judges. Much of the literary talk since has concerned the complex point of view he adopted for his story. That’s what I’d like to consider today.

First, let’s try and get a handle on what precisely he did. Then we’ll ask why he made those particular choices. And finally we’ll consider what effect they had.

Early on, Galgut establishes the presence of an unnamed but partisan narrator, who enjoys privileged access to past and present and to the interior lives of the characters. The narrator makes no bones about his opinions.

Then, what is perhaps most striking about the book is its ever-shifting perspectives. Galgut’s narrator dips into characters’ heads with manic abandon. Not a character appears who doesn’t get this treatment, revealing his or her thoughts and fears. And because the narrator is omniscient, he’s also able to say what thoughts and fears a character doesn’t have.

Consider this paragraph, and its ever-shifting perspectives:

Not the first time her brother has amazed her. It’s like looking at him through the wrong end of a telescope. Though from his point of view, she is suddenly in very clear focus. I was with him only yesterday, Astrid is thinking, he was alive and breathing, how is it possible that he’s neither of those things now? But Anton can see once more inside his sister, cold and clear as the clapper of a bell, that it’s her own death she’s feeling. If it can happen to our father, it can happen to me. This nothing, this state of Not. She mourns herself in terror.

The Promise offers all the virtues of realist fiction, plus some extras. Galgut keeps the surface of his prose choppy, roiling it with diverse narrative tools: points of view that shift within paragraphs, or even sentences; cryptic rhetorical moves, including addressing the reader directly (“if Salome’s home hasn’t been mentioned before it’s because you have not asked”); scenes that blur together with no transition; and an intermittent metafictional patter (“The house is dark, except for floodlights fore and aft, note the nautical terms, illuminating the driveway and the lawn”).

Galgut, he says, in “The Promise is a gleeful satirist, mordantly skewering his characters’ fecklessness and hypocrisy.”

In an interview with The Guardian, Galgut said a job writing a film script helped him realise “that the narrator could behave like a camera, moving in close and then suddenly pulling far back, jumping from one character to another in the middle of a scene, or even a sentence, or following some side-line of action that has nothing to do with plot.”

It’s true that the attention of the narrator wanders from character to character much as a camera does in a movie, but the narrator does something that, of course, cameras cannot do: he dips into his character’s consciousnesses at will, reporting on their thoughts and feelings – but reserving the omniscient right to comment, sometimes snidely, sometimes directly, about them.

The Booker judges said The Promise was “a spectacular demonstration of how the novel can make us see and think afresh”, and compared it to the work of William Faulkner and Virginia Woolf. They noted its “remarkable attention to structure and literary style.”

I think it’s arguable, though, that many of the features of the book – the intrusion of the author, its authorial perspective, its satiric tilt, the mix of third and first-person – all hearken back to the birth of the novel in English. Think of Richardson, think of Fielding.

And the effect of all these decisions? Well, to begin with it’s worth saying that Galgut is an exceptionally good and fluent writer. He takes chances – only some of which I’ve detailed – that would land any one of us in hot water; but he pulls them off.

But it must be said that omniscience has a chilling effect on any narrative. The characters dance to a tune that the author’s playing. It’s difficult to interpret some of the narrator’s observations as anything other than virtue signalling. We’re not really invited to share empathetically in the characters’ various journeys. Rather, we participate as fascinated and at times horrified onlookers.

The Promise is, as The Times’ Cooper put it, “now menacing, now darkly mirthful”. It does menace and mirth exceptionally well, and so there’s little point in saying that it isn’t the kind of novel it never set out to be. Take it on its own terms and I have no doubt you’ll find it more than readable.