Monday Motivation: We are the creators

By Richard Beynon
Posted November 22, 2021
In Monday Motivation, Richard Beynon's blog, Tips for Writers
Monday Motivation: We are the creators2021-11-222021-11-22https://allaboutwritingcourses.com/wp-content/uploads/2016/12/final_logo_small.pngAll About Writing Courseshttps://allaboutwritingcourses.com/wp-content/uploads/2020/02/2020-banners-2-19.png200px200px
1 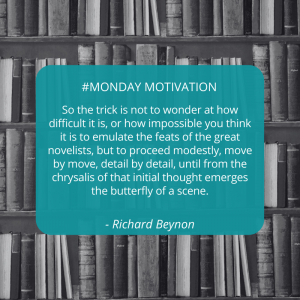 You start off with a bald idea, just a scribbled line, in which, say, one character bribes another to help him track down something or someone. It seems a paltry idea, a pathetic premise on which to base a scene. It’s the equivalent of a stick figure that a three-year-old could draw.

But then you start. The first sentence goes down. And the second. You introduce a detail about one of the characters, say:

“He was obese and dishevelled, loose folds of his belly fighting a winning battle with the belt that encircled his waist.”

And then you slip in a line, two, three of dialogue.

“My dear chap,” said the Egyptian, “trying to bribe me will get you everywhere.”

You throw in a thought of your protagonist’s. He wonders what he’s doing in an Indiana Jones screenplay. Or he recalls an incident in which he misjudged someone’s intentions, and paid the price for it. Or…

Slowly you put together scraps of description. You note the Egyptian character’s darting eyes… or perhaps they’re not animated at all, but somnolent. You become aware, through your protagonist’s senses, of a hubbub in the outer office.

A woman bursts in demanding to know what the police are doing about her missing husband. You note her appearance, her body language, her make-up… Her mascara has run, she looks like a refugee from clown school – but her tears are real, her passion overwhelms her…

And quite suddenly you find that initial slender thread of an idea has turned into a three-dimensional scene so real that it feels as if it’s always existed.

The magic of scenes is that they turn that two-dimensional stick figure into, well, not quite Michaelangelo’s David, but into something that feels real, that could be an incident that really happened, involving people who really lived and breathed.

The transformation happens line by line. What grows out of the gauze of your imagination gradually takes on form and substance, like Frankenstein’s monster emerging from the Arctic mists.

So the trick is not to wonder at how difficult it is, or how impossible you think it is to emulate the feats of the great novelists, but to proceed modestly, move by move, detail by detail, until from the chrysalis of that initial thought emerges the butterfly of a scene.

And then you begin another, and it too, in. time, will shake its wings and take off. And your readers will point at it in wonder and cry: 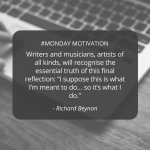