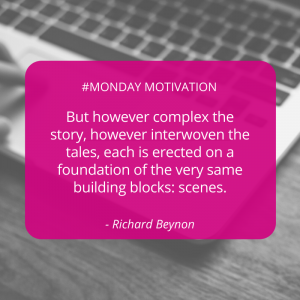 Life is a narrative composed of multiple overlapping stories. This is true for every one of the eight billion or so there are of us. Each of those stories can be told in terms of a series of interlocking or related scenes. Those scenes are the blocks from which the stories of our lives are constructed. And each of them is a story in its own right.

It’s a web of narrative denser than we can conceive. A Thousand and One Nights points towards the complexity of the story-universe; Finnegans Wake suggests that the skein of stories of which life is composed begins where it ends. The last sentence of Joyce’s epic, is completed by its first:  “… a way a lone a last a loved a long the / riverrun, past Eve and Adam’s, from swerve of shore to bend of bay, brings us by a commodius vicus of recirculation back to Howth Castle and Environs.”

But however complex the story, however interwoven the tales, each is erected on a foundation of the very same building blocks: scenes.

Which is where I’m beginning my story today, with a look at the structure of scenes. And I’m using as my guide a remark made on a recent BBC radio programme called Moving Image, in which film-makers are invited to discuss a film that has had a profound impact on their own work.

The film-maker, in this case, was Hossein Amini (Drive, The Wings of a Dove, McMafia), and the iconic movie he nominated was Michael Mann’s masterpiece, Heat.

He was discussing the key central scene of the film, when the gang, fresh from a bank robbery, finds itself ambushed by the police. The ensuing confrontation plays out over eight or so minutes. It’s utterly violent, constantly moving, a potentially bewildering and chaotic scene.

“One of the things with action scenes,” Hossein Amini said, “is that they should have their own story…” And that is something that the writer has to do on the page. If story doesn’t guide the action, he argued, scenes can become “really chaotic in the edit” – and, in the case of stories on the page, in the mind of the reader.

So, as in any story, scenes “have got beginnings, middles and ends.” What the writer has to aim for is real clarity.

Heat is well worth watching, if you haven’t already done so. And it’s worth, also, bearing in the mind its classic three-act structure (beginning, middle and end) while you’re immersed in the shoot-out scene.

Act One sets the story up. The robbers, having netted a huge haul of freshly printed bank notes in its vault, emerge from the bank and head for their getaway car.

Michael Cheritto (played by Tom Sizemore) gets into the car, full of glee at having pulled off the huge heist.

Neil McCawley, (Robert de Niro) and Chris Shiherlis (Val Kilmer), however, spot the police approaching them, and their dreams of pulling off the perfect caper go up in the smoke of Michael’s automatic weapon as he fires on the police.

Act Two deals with the ensuing mayhem. Chris and Neil respond like a smoothly functioning unit*, giving each other covering fire as they make their way towards the getaway car. They leap in and the car, driven by Donald Breedon (Dennis Haysbert) takes off. But the police have trained all their firepower on it, and within just a few metres Donald is mortally wounded and the car crashes into a parked vehicle.

The surviving gang members try to fight their way out of the tightening ambush. Chris goes down, badly wounded. Neil half-carries his bleeding comrade to a car that he hijacks.

Act Three tracks Neil and Chris finally making their getaway. Michael, though, alone, flees through crowds of traumatised bystanders, caught in the cross-fire. He snatches up a six-year-old girl to use as a shield, but Vincent Hanna, the lieutenant in charge of the police unit, played by Al Pacino, takes a bead on him and shoots him dead.

At no stage during the tumult of the scene, bloody and violent and kinetic as it is, do we lose track of the characters.

Heat tells the stories, naturally, of the two leads and antagonists, played by Robert de Niro and Al Pacino. But part of its brilliance lies in the fact that we’re also told the stories of most of the supporting cast as well. We know what they want, what their dreams are, what’s at stake for them.

Each of these stories has been told, carefully, in interlocking sequences of carefully constructed scenes. Just as every writer strives to do.

Just as you should, when next you sit down to write a story.

*   The shootout was so good that the clip was often played as part of their training for Marine privates fresh out of bootcamp at the Corps’ School of Infantry. It was used to demonstrate how a small force could fight its way out of an ambush.