Monday Motivation: In your end lies your beginning…

There are as many writing “practices” as there are writers. Donna Tartt begins, as I believe I’ve said before, with a random scene, involving random characters, the drama of which piques her interest. She produces a series of scenes that, later, she has to meld into a story, rewriting until they all form part of a seamless whole.

Ken Follett, by complete contrast, plans his novels out in meticulous detail before he writes a word of them.

Other writers plan their stories, then write scenes composing it in random order, flitting from one to another, higgledy-piggledy, as the mood strikes them.

Of course, if you choose to write a story out of the sequence in which the bits will finally flow, you will in all likelihood end up having to do some fairly heavy lifting (like Tartt) in order to make them work together.

But, each to his own.  Although, we usually advise writers to write in more or less sequential order, the better to understand the developing motivations of your characters.

But there are a few occasions on which we’re happy to see writers leapfrog chapters (or scenes, if they’re writing a screenplay) ahead of the narrative – and that is when they’re stuck. They can’t see their way forward through the scene they’re engaged with. They’re not sure what their characters would do under these particular circumstances.

In cases like these it is sometimes liberating to jump forward to a scene the purpose and the function of which is clear, and to write that. The action and the drama of that scene can then throw light on the earlier, problematic scene. Put this another way: it’s sometimes easier to write a set-up scene after you’ve got clear in your head what the pay-off needs to be.

And then there’s a deeper philosophical point I’d like to make here, and to do this I’d like, modestly, to invoke Aristotle.

The great philosopher identified four causes for every action. Now, I’d like to skip lightly over the first three and focus on the last, which has caused the most controversy over the centuries. That cause, Aristotle dubbed the final cause and you can think of it in this way:

Which is a really good argument for working out, roughly, what the end of your story is before you begin writing the beginning. The end will draw you towards it, it will guide your efforts (and your protagonist’s journey), it will serve as your lodestar – and will, in Aristotelian terms, be your final cause.

The same argument can be made for all the key scenes in a story.  If you know what the final scene of a chapter is, you’ll be better able to craft the preceding scenes so they lead inexorably towards that destination.

I truly have no idea whether these idle thoughts will help you out of a jam, or assist you in plotting a path towards your destination – but I had fun in frolicking through them.

* Of course, you can suggest any number of final causes for a story and argue your case persuasively. For instance, you could argue that it’s the satisfaction a reader derives, or the lesson that the viewer takes away from the theatre with him, or the royalties the writer earns from the sale of the book…

Read Jo-Anne’s latest blog: ‘Writing Secrets: A piece of writing is like a set of dominoes‘ 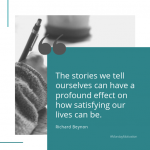 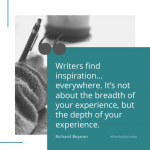