A woman in her late 40s has lived for some time entirely alone in a forest hut as a conservation ranger. A man travels through her area of the forest, one she is ambivalent about, but is nonetheless drawn to.

This is one of the characters in Barbara Kingsolver’s Prodigal Summer.

The woman begins a relationship with the man. There’s a powerful attraction between them, something she has missed, living so solitary a life. On the other hand, they have very different world views, and he is so much younger, which bothers her.

After all, she is entering menopause. It’s months since she had a proper cycle. How could so young a man be attracted to someone entering this barren phase of life? Some chapters later, she finds herself breathless climbing the hill. Age again. It only serves to emphasise the difference between them.

One cold evening he envelopes her in his arms, concerned about her. Her body feels so hot – is she sickening, perhaps, he asks? Still later in the book, the loss of a nest of chicks to a brown snake – an entirely natural occurrence – brings her to tears.

By now, if you’re anything like me, you’ll be wondering if she really is quite as menopausal as she thinks she is …

Kingsolver handles these clues so subtly. The first we take at face value – of course she’s peri-menopausal. But we readers are primed to pick up clues and slowly build pictures and interpret them for ourselves.

Each mention is significant, and the significance ratchets up with each further mention. By the third, we begin to realise that perhaps all is not as at first seemed – even before the character does.

This was her familiar, the small black snake that lived in her roof al summer, the snake she had defended as a predator doing its job. Living takes life. But not the babies, she cried in her mind. Not these. These were mine. At the end of summer the babies are all there will be.

She climbed down from the chair, clicked off the flashlight and headed out into the woods, tense with fury and sadness. She didn’t understand how far emotions were running away with her until she felt the coolness of tears on her face. She wiped them with the heel of her hand and kept walking, fast, away from the cabin, with the scent of fire and flesh, up into the dark woods.

What was this uncontrollable sorrow that kept surging through her body like hot water? In the last few days, she had cried over everything – phoebes, tiredness, the sound of a gunshot, the absence of sleep – idiotic sentimental tears, female tears. What was this?

…She breathed in slowly. This was what she had. The beauty of this awful night. She listened for small yips in the distance, something to put in her heart beside the lost phoebes and the dread of a full moon rising with no small celebrations from her body, ever again.

It’s a lesson in subtlety. The character believes one thing. But with each mention, not one of which is obvious, we start to come to a different conclusion.

It emphasises a mantra of ours: you need a light hand to be a good writer.

how to be a good writer, how to write a novel, writing advice, writing tips blog 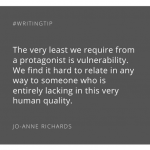 Writing Secrets: We like a little bad – but not too muchJo-Anne Richard's blog, Tips for Writers 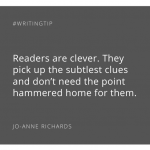