Writing Secrets: We like a little bad – but not too much

We were recently approached for help with a writing project in which the writer wished her sole protagonist to be a true psychopath, who enjoyed killing.

I’m not saying this hasn’t been done, but it’s hard to carry off. A true psychopath not only has no conscience, but lacks all vulnerability.

As readers, we’ll put up with a lot of flaws. We’ll happily follow the fortunes of a protagonist who carries out reprehensible acts – although usually we prefer these actions to be carried out for what we regard as the “right” reasons.

We’ll even sympathise with a mob boss who kills for all the wrong reasons – as long as he’s tortured about it. He’s been pushed into the “family business”, but he struggles with it. He grapples with how to be the kind of father and husband he would like to be, carrying out the kind of acts he does.

And yet, I think we’d find it hard to follow someone through a story if they torture mammals for fun. And I think we’d have difficulty caring about what becomes of someone who wants only to brutalises others or is cruel for the sake of it.

I believe the very least we require from a protagonist is vulnerability. We find it hard to relate in any way to someone who is entirely lacking in this very human quality.

It’s a different matter if you give us two perspective characters. This has been done more commonly: the psychopathic killer and the person hunting him or her, perhaps. Then we have the other character to identify with, while we’re fascinated and repelled by the killer. Their battle of wits fills us with suspense, but we’re rooting for the hunter of the psychopath, even as we might be filled with a reluctant admiration for the cleverness of the psychopath.

There must be a reason. We require motivation. The brutal terrorist has seen his family slaughtered. The killer is seeking revenge for some dreadful action we can understand. But the wanton killer, who simply enjoys snuffing out life? We care about seeing them caught or outwitted. But we’ll struggle to care enough to follow their journey – unless it’s a counterpoint to someone else’s story. 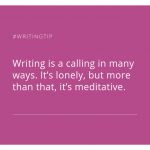 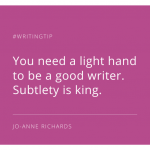