Monday Motivation: A little Latin to perk us up

A little Latin to perk us up:

Of course you’ll all recognize this as one of Catullus’s most memorable epigrams. I did a couple of years of Latin at university, to service a law degree I ultimately decided to disdain, but I’m afraid that Catullus never appeared on my horizon. Virgil, yes; Cicero, yes; Horace, of course. But Catullus, not.

So I’ll forgive you if these lines don’t strike a bell.

It’s only thanks to the odd coincidence of my reading of a book on Latin, and listening to a programme on the BBC on Catullus, that I’ve learned why Catullus might have been omitted from the curriculum of sensitive first-year university students.

The fact is he had a terrible reputation as the author of a series of scatological, profane and totally obscene verses, which, however beautifully and artfully composed, left his legacy in tatters – certainly as far as Latin scholars from the seventeenth century onwards were concerned.

But today his reputation is restored and he is regarded as one of the most luminescent of all Latin poets. Even his frequent profanities are praised as a sign of his authoritativeness and his authenticity.

But to get back to those two lines of verse… Here’s one translation by Simon Smith, a Reader in Creative Writing at the University of Kent:

I loathe and I love. You may want to ask why.

I can’t tell. It’s under my skin and I’m racked.

Here’s another by the writer of Long Live Latin, Nicola Gardini, professor of Italian and Comparative Literature at Oxford:

I hate you and I love you. Why do I do this, you might ask.

I do not know, but I feel it happening and I’m tortured.

It’s a little tidbit of a poem – but what it does in those few words, is establish an unresolved tension. I love you and I hate you. Not, you notice, I love you but I hate you. No, the two impulses enjoy equal weight in the poet’s mind.  Catullus makes no effort to resolve this apparent contradiction – and, indeed, why should he? We all know people who we love and loathe at one and the same time. This is one of those intuited truths about human existence that is not often acknowledged.

We’re all tempted as writers to resolve this kind of contradiction. We prefer the simplicities of single emotions. But it’s precisely the complex and sometimes contradictory emotions that make and keep characters interesting.

So, let’s take a leaf out of Odi et amo, and keep our bow-strings taut. After all, the unsprung trap is always more menacing than the sprung, don’t you think?

P.S. The BBC programme I listened to was one in Melvyn Bragg’s series, In Our Time; and the book I’m reading on Latin was a much-appreciated gift from my step-daughter, Maria. 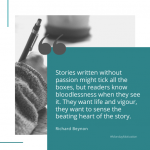 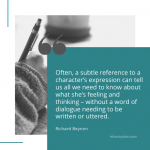