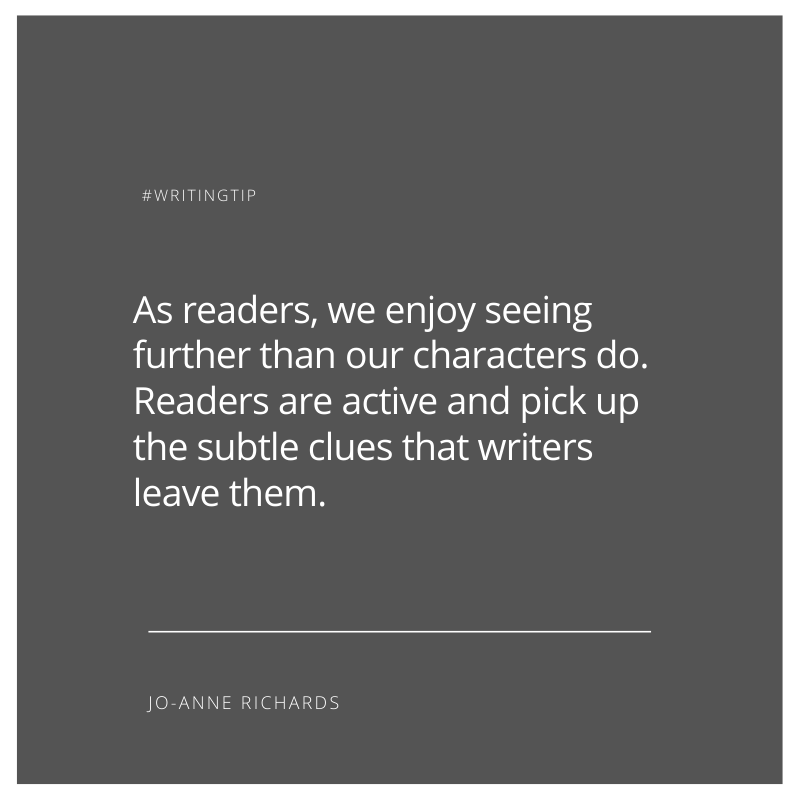 How self-aware should your fictional characters be? It’s a decision that needs some consideration, since it’s part of your protagonist’s make-up and personality.

There is no short answer either. In life, someone who is utterly blind to their own flaws can be irritating – but this same personality type can make for an intriguing protagonist. A character who consistently lies to herself can hold us because of her very self-deception.

As readers, we enjoy seeing further than our characters do. Readers are active and pick up the subtle clues that writers leave them. A self-deceiving character creates tension – will they learn more about themselves as they develop through their story arc?

On the other hand, a character who recognises their flaws – in life and literature – can be disarming. We like them for their honesty. We find them refreshing. Again, we are drawn onward by the tension of wanting to know how they will engage with those flaws as the story progresses.

In fact, this character type has become so appealing in our self-conscious times that an extreme form of self-awareness has developed in recent fiction – what New Yorker writer, Katy Wald, calls the “reflexivity trap”.

“This is the implicit, and sometimes explicit, idea that professing awareness of a fault absolves you of that fault …”

These protagonists have sprung up under the guise of authenticity, she writes:  self-critical, sometimes darkly funny characters who do nothing to remedy what they complain of, but enter into a “pained complicity” in our flawed systems and way of life.

“Desperate to undercut themselves before the reader can, they don’t prescribe or argue or even exercise much agency but, rather, turn inward, holding up a disenchanted mirror to what they think and feel. The result, viewed uncharitably, is a crop of protagonists who are to be congratulated for spending enough time contemplating themselves that they can correctly diagnose their own flaws.”

How insightful your character should be depends on the story you are setting out to write, which in turn depends on your character and what your character wants – because that’s what drives story, despite these contemporary creations who eschew agency in the belief that nothing in their lives can really change.

They still do want, need or long for … something, even if, in Wald’s words, they want someone to tell them what to want or, indeed, to want nothing.

Are they truly so perceptive, though? Is there not a deeply rooted self-deception in this focus on their own flaws? After all, it seldom dissipates the anxieties that prompt it.

“Mocking your emotions, or expressing doubt or shame about them, doesn’t negate those emotions; castigating yourself for hypocrisy, cowardice, or racism won’t necessarily make you less hypocritical, cowardly, or racist.”

However self-aware you choose to make your character, however, don’t fall into the same trap of self-deception yourself. I sometimes come across characters, in the work of new writers, whose “thoughts” on the page are unrealistically insightful.

And why? Because the writer wants to “explain” the character to the reader. Instead of scattering subtle clues over the course of the book, which allow the character to develop slowly in the mind of the reader, they whack in a few long and explicit “thoughts”, which tell us exactly what they’re like, and why.

By all means, make your character as self-aware or blind to self as your story requires, but don’t use insight as an excuse to explain.

Read Richard’s latest blog: ‘Monday Motivation: A character by any other name would be – wrong‘

Writing Secrets: Write for yourself, not for othersJo-Anne Richard's blog, Tips for Writers