Monday Writing Motivation: An insouciant and flippant disregard for the truth

By Richard Beynon
Posted May 10, 2021
In Monday Motivation, Richard Beynon's blog
Monday Writing Motivation: An insouciant and flippant disregard for the truth2021-05-102021-05-08https://allaboutwritingcourses.com/wp-content/uploads/2016/12/final_logo_small.pngAll About Writing Courseshttps://allaboutwritingcourses.com/wp-content/uploads/2020/02/2020-banners-2-16.png200px200px
0 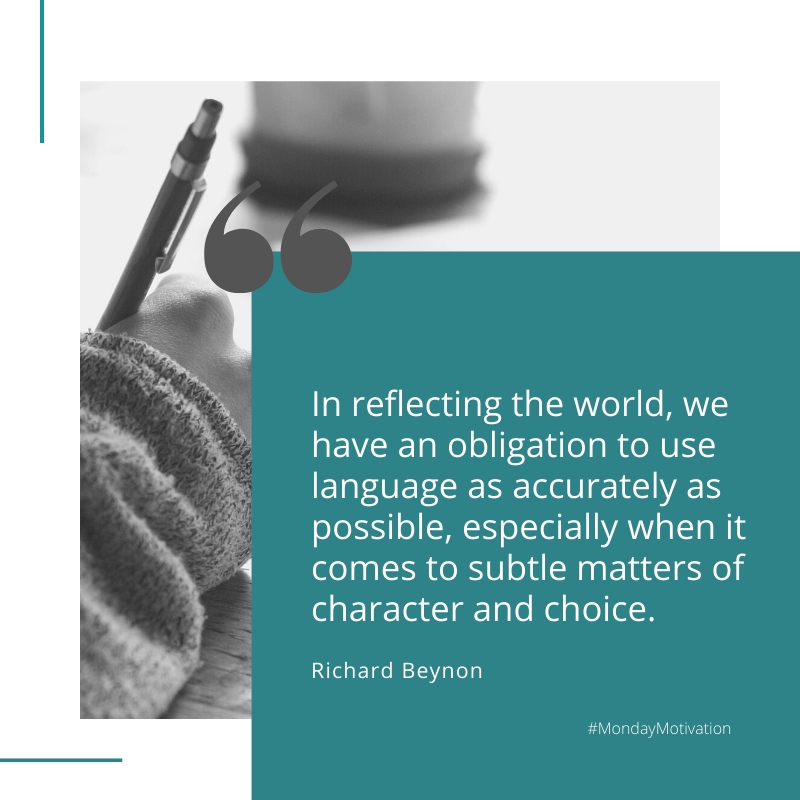 Language is capable of making the subtlest of distinctions. In our quest to move the story along, we sometimes forget about this awesome power. We write as if the world is divided into the good guys and the bad guys; as if the morally good thing is obvious; as if the choice between doing good and doing evil is as simple as this proposition sounds.

In politics, the distinction between good and bad, between white and black, between the light and the dark has become the source of debilitating partisanship. If you’re not for me, you’re against me. If you argue a case with which your opponents take issue, they call you liars, or hypocrites, or fascists.

We’ve become familiar over the past decade or so with the increasing violence of judgements made in the political arena. Some fear that this trend signals the beginning of the end of the current democratic era.

But then you encounter a man, a politician, who demonstrates the power of language, and you realise that, so long as we do have recourse to this limitless resource, we can hope for a sanguine outcome to the current tussle for supremacy between the forces of authoritarianism and democracy.

The exchange I heard that prompted me to draw such a lofty (not to say longwinded) conclusion took place on a Sunday morning talk show on the BBC. The host of Broadcasting House, Paddy O’Connell, asked the former Speaker of Parliament, John Bercoe, whether he thought the prime minister of the UK was a liar.

Now, in conventional political discourse, a member of the prime minister’s party would instantly have denied the charge. “A liar? Of course not! He’s a model of probity!” And, in all likelihood, a member of the opposition party might have doubled down on the charge: “Not only is he a bare-faced liar, he’s also a scoundrel and a thief!”

But this is how John Bercoe responded:

“I don’t say that (he’s a liar).  What I say is that he has an insouciant and flippant disregard for the accuracy of what he says to the House of Commons – and that is a hugely important and worrying phenomenon… “

“Doesn’t that sound like a lot of words for ‘lying’?” O’Connell asked him.

“No, I don’t think so… I think the accusation of lying has to be driven by a knowledge of intent. And these matters are susceptible to subtle distinctions, and those subtle distinctions matter. I don’t want to coarsen and debase the currency of legitimate political debate by lobbing an accusation of lying. But what I do say with crystal clarity, I think, is that the prime minister has demonstrated an insouciant, a flippant, a casual disregard for the accuracy of what he says. He’ll tend to say something and then subsequently when it is shown to be untrue, he just moves the ship of state on and discusses another subject…”

He talked briefly about the obligation that members of parliament have to speak the truth, and to correct errors when they’re brought to their attention. Johnson, he argued, does neither, and he ended his argument with this swingeing conclusion:

“… (A)n insouciant disregard for the truth and an unwillingness to correct falsehood is ultimately corrosive of public trust… Rectitude matters.”

Is your hero a good man? Is his antagonist a bad man? As Bercoe demonstrated, nothing is quite as simple as that. In reflecting the world, we have an obligation to use language as accurately as possible, especially when it comes to subtle matters of character and choice.