By Fred de Vries
Posted July 8, 2021
In How to write a book
Architecture and infrastructure: 3 tips for writing stellar non-fiction2021-07-082021-07-05https://allaboutwritingcourses.com/wp-content/uploads/2016/12/final_logo_small.pngAll About Writing Courseshttps://allaboutwritingcourses.com/wp-content/uploads/2021/07/2021-banners-3.png200px200px
0

Writing is a complex business, involving much more than stringing a few sentences together and putting them in a certain order, for a story to unfold. Two aspects are generally overlooked in writing classes. And, in my humble opinion, they are equally important as, if not more important than components such as description, detail, sub-text, characters, voice, whatever. Let’s call it the architecture and the infrastructure of the story.

Both have to do with the way a story looks and reads. And those are things that writers, both fiction and non-fiction, often completely overlook or ignore. A story may be very exciting, totally gripping, feature unbelievably fascinating characters, but if the architecture and infrastructure don’t work, it will fall completely flat, or, to use the appropriate metaphor, collapse.

So why do I find these two aspects so important? There are many, but I’ll give you the three most important ones.

The first one is related to a book I’ve been reading by the late Dutch writer Martin Bril, who was seen as ‘the master of the column’. Throughout the years he developed an increasingly unique and idiosyncratic style. One of the signature characteristics of his writing was the one-word paragraph, often not even a word but a verbal expression, things like ‘tsja’, which is untranslatable – perhaps ‘oh well’ would come close.

He said the reason for these ultra-short, high-impact paragraphs was that he wanted to indicate a kind of ‘and now for something completely different.’ A way to change the subject. But, he added, he also isolated words as a way to draw extra attention to something. You can imagine what his columns looked like, how the one-word paragraphs stood out, made you want to read what came before, and what will come after, grasp the importance of that one word. This is part of what I’ll refer to as the architecture of the story, the way it appears, the lay of the text. The ultimate example of shape matching content was American ‘Bomb’, a poem by Gregory Corso, written in 1958 about the nuclear bomb. The piece was shaped like a mushroom cloud.

2: The problem of repetition

The second reason for choosing architecture and infrastructure was an interview that British writer Martin Amis had with The Economist. Amis talked, among other things, about the problem of repetition. Like if you have used a word before and you don’t want to use it again, what do you do? First of all, he warned don’t be hysterical, don’t be too pedantic; if there is no proper alternative, use the same word. But normally Amis would open the Thesaurus. There he finds several possible replacements. He then checks the dictionary, just to be sure that the meaning is exactly what he wants. Subsequently (notice how I swapped ‘then’ for ‘subsequently’ here) he places his substitute word in the sentence, and reads it out loud, to see if it works in terms of sound and rhythm. He looks for things like alliteration and inner rhyme. This all is part of the interior, the infrastructure. It deals with questions such as: when do repetitions work? Does alliteration add anything, or is it corny? And if I have a sentence with two nouns, and one gets an adjective, should the other one also get one, for the sake of the rhythm?

3. The shape of a paragraph, a sentence, a page…

The third reason is that, for quite a few months in the recent past, I had been translating my book, Blues for the White Man, from Dutch into English. It was published by Penguin Random House in May. The job made me think a lot about the architecture of the pages, the way they look. Does it look appealing? Does it look interesting? It also posed other questions. Does every piece of dialogue get a separate paragraph? When do I start a new paragraph? What do I want to achieve by starting a new paragraph? And what do I use to mark a new paragraph? Three times the space bar? Five times? The Tab bar? A blank line?

Paragraphs are tricky. The newsy way of using them, where almost every sentence gets a separate one, doesn’t work in a piece of fiction or non-fiction. But huge blocks of text can be equally off-putting. Unless, of course, you do it on purpose, and want to prove or show something by having this unappealing wall of words.

Translating my own work also confronted me with the infrastructure of the writing, rhythm and flow. How do I avoid the sentences sounding too similar? Can I start two subsequent sentences with the word ‘I’? What about length? Is there enough variety in the pacing? Have I avoided too many subordinate clauses? Does a full stop suffice, or do we need a comma or a semi-colon? (Amis, by the way, abhors the use of the semi-colon, preferring the dash.) How will I code dialogue? With single quotation marks? Double ones? A dash? None at all? And when do I use an exclamation mark or whole words in capital letters? That last one was easy: as little as possible, it looks horrible. You have many other means at your disposal. You can use different fonts, tricks like italics or bold. You can mark a new sub-chapter by using a star, three stars, a number, a blank line.

And even here, when I’m writing these last sentences, I wonder, shall I separate by using a comma, a full stop, or a semi-colon? No, not a dash, that’s for sure.

Want to learn more? Join All About Writing and Penguin Books on Saturday 10 July for the launch of Fred’s new book, Blues for the White Man. Fred will be in conversation with Richard Haslop, one of South Africa’s leading experts on blues and roots music. Or, sign up for Fred’s Non-fiction Masterclass on Saturday 24 July. 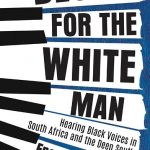 Blues for the White Man by Fred de VriesHow to write a book, Newsletters