Monday Motivation: How to hurdle self-consciousness 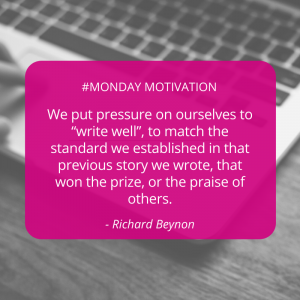 A quick word on a trick to hurdle that bane of all writers: self-consciousness. It came in an article in the Guardian about writing as “truthfully” as one can. I’ll consider the issue of truthfulness in fiction in a later blog; for now, I’d like to relay a piece of advice that the Irish writer Donal Ryan gave in his column.

He attributed it to a colleague at the University of Limerick, where they both work in the field of creative writing. Sarah Moore Fitzgerald argues in favour, he reports, of a “draft zero” – that draft of a story that comes before a first draft.

In your draft zero your story “is splashed onto your screen or page”. All or most of the essential elements of the story are present, but “it offers (writers) complete freedom from any consideration of craft or finesse.”

In other words, it’s the first rough representation of your story. It’s what Michelangelo hacked out of the marble, freeing the outline of the figure trapped within – but before he applied any artistry to the work.

Of course, the phrase “essential elements” rather begs a question. What are the essential elements of a story? In the hands of one writer, they will include things that another would overlook – and those overlooked threads and characters and incidents might well be the very things that make the story work – or make it great.

But that aside, I pass this advice on to you because I think it is wise. We put pressure on ourselves to “write well”, to match the standard we established in that previous story we wrote, that won the prize, or the praise of others. Or we seek to write a perfect first draft, just as some renowned writers are said to do.

But the first draft is not the time to seek perfection. It’s the time to get the story down. The elaborations, the insertions, the editing, the adjustments – those can come later.

So do yourself a favour and ease up.