By All About Writing
Posted November 8, 2022
In Newsletters, Writing Challenge
Winners of the August/September Flash Fiction Challenge2022-11-082022-11-08https://allaboutwritingcourses.com/wp-content/uploads/2016/12/final_logo_small.pngAll About Writing Courseshttps://allaboutwritingcourses.com/wp-content/uploads/2022/03/winners-blue.png200px200px
0

Here’s what we asked you to do for our August/September flash fiction challenge: Write a scene in which a long-held secret is revealed. Show us the consequences of this revelation and your character’s responses to it.

We had a lovely variety of responses, from the macabre to the laugh-out-funny.

Because it is beautifully written, and because the subtext is so suggestive, just a wisp – we’d love to know whether you picked up on it! – we’re giving first prize to Sandy Lee for her study in subtlety. You’ll need to read it carefully, and give due weight to all the clues that Sandy provides. Congratulations, Sandy, you win a  a literary assessment of 5000 words worth R2750/£150 or a voucher to the same value to use on one of our courses or programmes.

Our list of runners up begins with Mitzi Bunce-van Rooyen’s Gut Punch, which ends with an exquisite twist of the knife in the narrator’s open wound.

Daryl Boswell’s gleeful celebration of a secret kept wins him a place on the podium.

Helen Niven plays on the worldwide tendency to polarised politics in her piece.

Linda Ravenhill’s character’s secret is one that can only be revealed in the rather chilly confines of the autopsy room.

And, finally, Lynn Joffe’s piece ends with a line as chilling as any mortuary: “That’s when the real police rocked up.”

Well done to all of you – and, of course, all the others who rolled up their sleeves and tried their hand at it. And don’t forget to enter the current flash fiction challenge, which you’ll find here.

Moira uses both hands to lift the nearly empty mug of coffee to her mouth.  She swallows once, then again. She slides her tongue over her lips and smacks them together.

Nearby a tall woman stands guard over a free table nestled in the welcome shade of the white stinkwood.  Her blue sun visor is pulled low over her forehead forcing the silky, silver-white curls to explode over the brim.

There is something about the unruly abundance that requires Moira to blink rapidly. She lifts her hands to her straight brown hair, blunt cut at the chin, and adjusts it slightly.  In this heat, it will soon begin to itch.

Moira gathers up her belongings and, before she can reconsider, limps over and places her hand on the woman’s arm.

The woman stiffens just a little.  She hesitates.

She glances furtively at Moira’s hair then, without the trace of a smile, adds, ‘You’ve made my day.’

Moira lets her hand drop, smiles uncertainly and turns to go.  She takes a few steps then looks back over her shoulder. She makes one last attempt.

The woman inclines her head slightly.

Moira leans heavily on her stick and moves lopsidedly between the crowded tables and bright red umbrellas to the exit.

The woman watches her go. She runs her fingers gently over the tender raised area below her right collar bone, the tremor in her hand unmistakable.

My five-year old plops herself next to me, breathes peanut butter into my face. “Why you crying, mommy?”

I wipe my eyes with a sodden tissue, blow my nose hard. “Mommy’s sad, angel.”

Pippa pushes my grey hair back with a sticky hand. “Your face is all puffy.”

I blow up my cheeks. “Does mommy look like a Puffer fish?”

She looks at me with concern beyond her years. “Tell me why you’re sad.”

“It’s grown-up stuff. Nothing for you to worry about, angel.”

“How about I make you another sandwich?”

She shakes her head. “Not hungry. Tell me now!”

I’m exhausted. Fed up with him forever seen as the hero. “Your daddy kissed another lady,” I spit. As the words exit my lips I wish to suck them back in.

My daughter reclines against the comfy cushions, scrutinizes me with her dad’s blue eyes. She appears to be taking in every detail of my blotchy, lined, overwrought face. She places her tiny palms firmly on my wet cheeks, peers deep into my swollen green orbs.

“It’s because Aunty Shirley’s prettier than you, mommy.”

The Provincial Superior shifted in his seat.

“I don’t know about you, but I’ve found this process not only exhaustive, but also exhausting.”

I could recite the ad off pat: We are seeking a man of integrity…who has the courage to uphold principles of truth blah blah blah within the constant framework of the Beatitudes. Colleagues said they didn’t believe anyone could make it.

Waiting for him to continue, my eyes fell on a rosary snaking amongst some documents on his desk. It suddenly dawned on me it was Friday – he may have been meditating on the five Sorrowful Mysteries. Was this an omen?

“Just some mopping up, then we’re done. The Old Boys on the Board have a concern.”

He ran his fingers through his hair; then hit me with his question: “Tell me, Mr Goodenough, are you gay?” his mouth pursed in a taunting smirk.

I balked at such an intrusion – hadn’t expected it, looked away, found Our Mother of Perpetual Help hanging on the wall.

I fiddled with the cufflinks on my shirt – Kobus gave them to me for my fortieth. I twisted one so roughly, it slipped out of place. After much fumbling, I manoeuvred it back through the buttonhole.

My silence was clearly making him uncomfortable, and I delighted in it.

Then I slowly pushed my chair back, stood up and looked him straight in the eye.

“Tell the Board, Brother, it’s none of their business.”

A sneer curled around his lips. ”So you know,” Don said. ”You finally found me out- by snooping. Took you a while though.” He swigged from his glass, and placed it on the table, close to the edge.

A vein throbbed at her temple. Warning, danger ahead, it said. Her voice wobbled. “I’m such a fool. I should have known, all these years of deception.” Jill placed her glass on the table. Something started to burn on the stove.

Don sniffed the air. ”So Jilly dear, let’s toast the end of deception then, and drink to honesty.”

He poured himself another drink.

Anvils beat in her brain. ”Do you think we can just carry on and pretend that nothing has happened, that nothing has changed? You are such an arrogant, egotistical… God I don’t know what to say.”

”Then don’t say anything more.” He moved towards her. ”We’ve had twenty good years. Are you going to throw it all away, because of one little…”

She moved away from him. ”Don’t you dare suggest it’s one little anything. I thought I knew you.”

”But you do my darling. You’ve known me over and over again.” He crinkled his blue eyes.

”Spare me the charm offensive, it doesn’t work so well any more,” she hissed.

Don sniffed the air again. “I think the kitchen is on fire.”

I didn’t mind the silence. Neither that nor the inky, airless dark, the cold, unyielding steel of the bed, nor even the frigid air bothered me. After the brutality of the day before, I was relieved to be alone.

Things hadn’t entirely gone to plan; that was laughably obvious. In retrospect, the wine had been a bad idea, dulling my senses, leaving me vulnerable, off guard. Still, I had to give the boys credit for pulling it off. Bravo my darlings, bravo. Didn’t think they had it in them, the little…

The sucking open of the cubicle door ended my reprieve. Two hands reached in and pulled me roughly into the harsh, unforgiving light. It was him – the one with the glasses and benign expression. He’d been the worst: clinical, ruthless, efficient. Fear flooded my body, dread coiling in my stomach.

Without warning, he flicked back the thin sheet that hid my nakedness. Exposed, humiliated, I could do nothing but wait. After a long moment, he sighed, wiping a gloved hand over his weary face before – with unexpected gentleness – he reached forward and returned the sheet to cover me.

I did feel a bit sorry for him then. It really was genius how they’d done it, those boys. Still, eventually, he’d get it out of me. There was no way I could hold out against those knives and saws and needles. And, after all, what was it they said? Oh yes: the dead tell no lies.

The security guard stopped me at the boom. I’d overdone it at the tanning salon and I must have looked like a Mexican to him. Or even an Arab. 9/11 wasn’t exactly the day to be hauling a brick of compressed dagga in the trunk of a rental car, packed solid with surgical gloves so there’d be no fingerprints. Plausible deniability, Brad told me. Hide in plain sight. ‘I’ll wait for you on the freeway,’ he told me. ‘Just grab the stash and make your way to the Denny’s on the west side.’ He basically abandoned me. The bastard.

The guard peered onto the plush interior. ‘Ma’am, we’re doing spot checks on all passengers,’ he said. ‘Could you pop the trunk?’ ‘Sure officer,’ I said sweating a little on my upper lip. ‘Hmm. What’s this?’ he asked, hauling out the brick. ‘I really couldn’t say,’ I said, regurgitating Brad’s instructions. ‘I’ve never seen it in my life before.’ The guard pulled out a Swiss Army knife, slit one of the sides open and sniffed the end of his blade. ‘This smells like marijuana,’ he said. ‘I wouldn’t know,’ I said. ‘There’s enough here to get half the state high for a month,’ he said. ‘This carries a five year prison sentence.’ ‘You don’t say, officer,’ I said. ‘I’m just returning the rental. My boyfriend and I are on our way back to Missouri. We were just trying our luck at the Kickapoo Casino.

That’s when the real police rocked up. 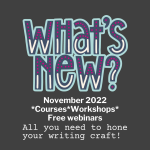 What’s New: November 2022How to write a book, Invitations, Newsletters 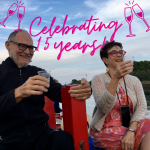 November Newsletter: Raising a glass to our communityAll About Writing, How to write a book, Newsletters