Monday Motivation: Or what’s a heaven for?

I listened recently to a BBC programme devoted to the subject of failure. The presenter wondered why heroic failures – Scott, who failed to reach the South Pole, Irvine and  Mallory, who failed to scale Everest, David Livingstone, who failed to find the source of the Nile, or to convert more than one pagan to Christianity – were so enthusiastically memorialized, while those who actually achieved the feats concerned were so often forgotten. (Who did discover the source of the Nile – and frankly, who cares?)

It was a fascinating meditation. I wondered, though, why the programme didn’t devote any thought to the relationship between writing and failure.

One of the acknowledged masters of failure and fiction is Michael Chabon, author of Wonder Boys, The Amazing Adventures of Kavalier & Clay, Moonglow and others. He’s won the Pulitzer Prize plus the Hugo and Nebula Awards, among many other honours.

And yet he says this about his writing (and perhaps, all writing):

“Every novel, in the moments before we begin to write it, is potentially the greatest, the most beautiful or thrilling ever written; but in the long dying fall after we have finished it (if we finish it), every novel affords us, with the generosity of a buffalo carcass affording meat, hide, bone, horn and fat, the opportunity to measure precisely, at our leisure, the distance between it and that L’Enfantesque dream.”*

This insight appears on the first page of Chabon’s great unpublished book, Fountain City, that he began writing after the critical and commercial success of his first novel, The Mysteries of Pittsburgh. After five years he was 1500 pages in – with no end in sight – and eventually abandoned the novel (despite having been paid some impressive advances by his publisher) – and got to work on Wonder Boys..

It’s true. Any writer who believes in the magic of his craft, will write sentences that she knows are only pale Platonic reflections of the real thing. The story as it unfolds (or unravels) will not carry the punch, or the conviction, or the authority that she dreamt it would. Sometimes she’ll seek for that single word that would bring a passage to life, that would serve as the pivot of the paragraph.

And she won’t find it.

Ah, well. I go with Browning on failure: Ah, but a man’s reach should exceed his grasp/ Or what’s a heaven for?

Because failure’s a function of ambition, isn’t it? If we’re happy to write dreck, then we’ll not be disappointed with what spews out on our screens. But if, au contraire, we value the power and the beauty of accuracy and fluency, of clarity and comprehension, then we are bound to fail, bound to fall short of that impossible ideal.

Failure, though, although our society stigmatizes it, is not, or should not be an humiliation. It represents an opportunity to do better. Because, as Chabon says, in that same, failed novel: “Our greatest duty as artists and as humans is to pay attention to our failures, to break them down, study the tapes, conduct the postmortem, pore over the findings; to learn from our mistakes.”

P.S. The question arises: why does Chabon devote so much thought to failure, when his own literary career has been so singularly successful? (He even got to write a draft of one of the Spiderman movies, for god’s sake – and if that didn’t convince him that he’d entered the writing hall of fame, what would?) He says, though, that “(s)uccess… does nothing to diminish the knowledge that failure stalks everything you do.” And I have this very sneaky feeling that he’s absolutely right.

P.P.S. Chabon’s sense of failure extends to other aspects of his life. Here he is on fatherhood: “Being a good father is probably my major ambition in life, and yet I think there’s not a day that goes by that I don’t feel I failed in some way or another. I didn’t pay attention when I should have paid attention. I missed a cue my kid was giving me and there was a problem to deal with. It’s just an endless failure.” 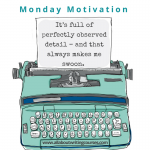 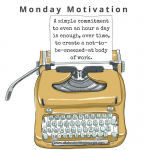