By Richard Beynon
Posted September 4, 2018
In All About Writing, Newsletters
September Newsletter: Writers need company – and a helping hand2018-09-042018-09-04https://allaboutwritingcourses.com/wp-content/uploads/2016/12/final_logo_small.pngAll About Writing Courseshttps://allaboutwritingcourses.com/wp-content/uploads/2018/09/neonbrand-618322-unsplash.jpg200px200px
0

I’m writing this in Venice, on the third floor of the Palazzo Albrizzi, where the fourth iteration of our annual writing retreat is about to begin. The first of our happy retreaters will be arriving shortly – although we only get into the swing of things tomorrow. We have no doubt it’ll be as creatively satisfying a week as ever. I wonder if there’s time to nip down to the Ponto Storte for a quick Campari spritz…?

Ah, no – there are more important things on my agenda. Like this:

We amuse each other with anecdotes: “Do you know what happened to me on the way to the Doge’s Palace this morning? You won’t believe this.”

Stories, in short, make the world go round.

So we’re dedicating this newsletter to the idea of story which is, after all, the challenge and the triumph of every writer.

Is your story running on empty?

We all began the year with a story with a happy ending: that by December we’d have written that long-deferred novel or script… or that short story that’s teased us these last months… or started a blog that would stun its readers with its wit and originality…

But now that story feels a little flat, the climax as far away as it was in January, and we’ve started saying, “Well, maybe next year…”

But, people, I have news for you. It’s never too late to begin.

But we know it’s really hard writing on your own. That first paragraph, that first line, can be more daunting than the Comrades or the London-to-Brighton. Writers, like runners, are buoyed along by the company. Remember that you have all the resources of All About Writing at your command – and through us, access to our lively and steadily growing community.

Those resources are on full display over the coming months.

So how can we help you?

Take our weekend in Stow-on-the-Wold between 21 and 23 September, for instance, when we’ll be focusing entirely on the generation and the framing of story. (There are just two places left on the course which takes place in this iconic Cotswold market town.)

Or our two intensive online Coaching Programmes, one on Story, the other on Scenes, which launch on 5 November – but which you could join at any time. Sign up early for either of these two-week programmes, with intensive daily feedback from Jo-Anne and me, and you’ll enjoy a 20% discount.

And finally, a curiosity. Between 18 and 30 of November, Trish and I will be manning a bookshop in Scotland’s booktown (it boasts 11 bookstores amid a population of just 1 000) of Wigtown. We’ll be bringing stocks of South African books to whet the appetites of readers, and I’ll be running a series of seminars, all on the house, for anyone interested in honing their writing skills. So if you happen to be in the area…

P.S. A word to the wise. Our face-to-face Creative Writing courses, scheduled for February and March next year have already started to attract writers. So if you’re thinking ahead and want to secure a place then I have a wee piece of advice…

All About Writing’s latest writing challenge offers the winner a literary assessment on 5000 words of writing worth R 2750. Here’s the challenge:

Your scene should be no more than 250 words long. Paste your entry into the body of an email and send it to pam@allaboutwritingcourses.com .

All manner of cliff-hangers

We told you last month that cliff-hangers create tension and suspense by posing particularly dramatic questions and delaying the answers.

A gun being cocked (do you still cock guns?) and poked in the ear of your hero at the end of a chapter makes a perfectly satisfactory, if very clunky, cliff-hanger. But you can be much more subtle than that, both in setting up the cliff-hanger and it giving us the pay-off – which is not part of this challenge. Instead of giving us unambiguous notice of imminent danger (the gun in the ear), you could simply give us a tiny clue: the twitch of a curtain, which the hero might dismiss, or the hoot of an owl, or a patently ill-advised decision…

Then the pay-off (which can follow immediately, or be delayed for as long as you think advisable) can be much more surprising. After all, the gun in the ear can be followed by a limited number of alternatives: the gun goes off, the gun doesn’t go off, the gun jams, the eleven-year-old who’d stuck his toy gun barrel into the hero’s ear laughs uproariously…

But with a more subtle set-up, you can surprise us in all sorts of ways. The twitch of a curtain foreshadows the emergence of a femme fatale… or that eleven-year-old… or a vengeful Egyptian mummy… or a breeze that itself carries the perfume of summer delight… or…

Whatever cliff-hanger you choose, have fun teasing us with it!

The documentary Trish co-produced (Voetsek! Us? Brothers?) is showing at the Afrika Film Festival in Cologne on September 22 and has been selected for the Global Migration Film Festival that’s being held in multiple centres around the world between November 28 and December 18.

Congrats to Trish and the director, Andy Spitz, who has been documenting the story of migrants and asylum seekers coming to South Africa, and the reception they’ve been accorded, for over a decade. 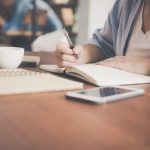 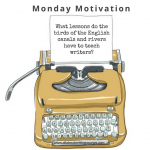 Monday Motivation: On the margins of the river, a lesson for all us writersAll About Writing