Writing Secrets: Those pesky darlings – we can’t help but love them

I recently gave a workshop at which I was called upon to introduce a young writer to the idea of darlings – and particularly, how to murder them.

She wrote a lyrical passage with much to recommend it. The only problem was, it didn’t fit there. It was wrong for the character, it brought the scene to a halt and it was just a teensy bit over the top.

It was begging to be skewered on the kind of spike we used to keep on our desks when I started out in journalism.

At first, she resisted. She was in love with it. She was dazzled by its beauty. Yes, I said. We always are. That’s why we call them darlings. And that’s where fierce editing comes in.

Perhaps it’s got to do with the intense vulnerability of writing. It’s so much a part of you that it’s hard to see it as a separate being.

You love it with a fierce, protective passion that makes you want to defend it against all detractors. You might have found the perfect cadence for a particular paragraph. When you wrote it, you struggled over it, finding just the right words – not only to express your meaning, but to flow in the most melodic way.

Then there’s the fact that you’ve probably read the thing so many times, it’s developed a rhythm that you’re used to. It has a flow which echoes satisfyingly in your head.

All that can blind you to the fact that a section doesn’t fit there, or isn’t true to your character, or doesn’t take the story forward.

Editing embodies every aspect of your manuscript. It’s no good writing a lyrical description of a place, seen through the eyes of a character who doesn’t have the voice or level of education for that kind of awareness. Or a beautiful scene, which gives a powerful sense of place, yet doesn’t take the story forward or tell us anything about the characters. 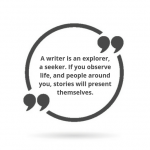 Writing Secrets: Do you have a story to tell?Jo-Anne Richard's blog, Tips for Writers 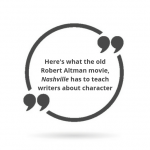 Writing Secrets: Your character needs a signal, even if they interpret it wronglyJo-Anne Richard's blog, Tips for Writers