Monday Motivation: The many masks that writers wear

For 40 years the New York artist Cindy Sherman has been photographing herself in a huge variety of disguises, playing a remarkable number of dramatic roles, pretending to be, oh, the chatelaine of an imposing mansion, a prostitute, a country bumpkin, a slut, a hollowed-out housewife…

In a brilliant portrait of the portraitist, NYT writer Parul Sehgal gives us insights into this most chameleon-like of all modern artists.

It seems to me that Sherman’s enterprise over the forty years of her productive life is very similar to the process by which we guard and insulate ourselves from perceived harm in our different worlds.

It’s also very similar to the process by which we create characters that are ourselves – unlocked from the shackles of our inhibitions.

We all acknowledge, without benefit of Freud and Jung, that we adopt a variety of masks over the course of our very ordinary lives. We put on a professional mask, for instance, along with a sober suit, from nine to five. We corral in our emotions during these hours, allowing our colleagues and our superiors only glimpses of our insecurities and our ambitions.

At home, with our families, we tuck our corporate selves into a filing cabinet somewhere in the jumble-room of our desires, and allow the loving spouse and indulgent parent to emerge.

If we’re family-less, we might meet up to kick off at a local bar, swap war stories, overcome the inhibitions that usually fence us in, and become more of what we truly believe to be ourselves.

We visit an aging parent, and behave (and feel, and speak) accordingly.

We find romance, and in the heady days that follow, allow yet other aspects of ourselves to emerge.

These are just some of the more obvious masks we don. But in among the stereotypes, a multitude of lesser selves will also show themselves.

For a moment, there, you felt a pang of such jealousy, such envy, such resentment, that you could have killed the person who provoked it…

And on a particular day, for very good reasons, you were overcome by feelings of such anguish and despair that you could have done away with yourself.

On another occasion, after a particular, well-earned triumph, you felt so smug, so complacent, so filled with self-righteous satisfaction that anyone privy to those feelings would have felt instant revulsion.

Over forty years, Cindy Sherman has made these many selves flesh. In the five hundred images she has captured – all of herself made up and got up in five hundred different ways – she has caught all these characters that, bundled together, make up her single complex and contradictory self.

And that, do I have to remind you, is what we, as writers, do. We identify within ourselves some mini-me, some transitory identity that might only show itself as a passing possibility. The self capable of murder. The self inspired by a love so single-minded that it will do anything at all in its search for satisfaction. The self so without self-regard, that it abases itself in its ceaseless pursuit of approval.

We use these selves as they are, or we draw different aspects of ourselves together in fresh combinations in order to create characters that seem utterly unlike us.

But at root, all of our characters and their desires, their appetites, their fears and their vulnerabilities, are drawn from within the singular character that is – our self.

After a tour of the many identities of Cindy Sherman, Sehgal ends his character study on a marvelous, telling note:

“Sherman pulled out her phone,” he writes, “to show me a few pictures. She tried unlocking it using facial recognition, but it wouldn’t work. She lifted and lowered her chin, then raised her eyebrows… She opened her eyes wide and held the phone very still. She was trying to look like herself.” 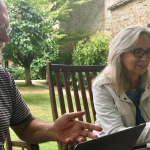 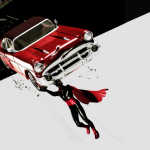