What screenwriting can teach novelists and short story writers

Writing for the big screen (and the little screen) is very different from writing for the page – but the skill sets overlap.  Two of the biggest of these overlaps are dialogue writing and scenes. Let’s focus here on dialogue.

Although screenwriters are constantly encouraged to think visually, dialogue is all-important, simply because bad dialogue can sound so atrocious. (Think of much of the dialogue of Star Wars. George Lucas is not a good writer of dialogue. It’s his stories that save the day.)

So whether or not you’ve ever thought of writing for film or television, learning a screenwriter’s secrets to better dialogue will help you hone your craft.

All About Writing runs a number of script and screenwriting courses. Choose between our Screenwriting Crash Course or the more advanced Kickstart Your Screenplay course. 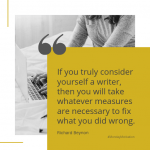 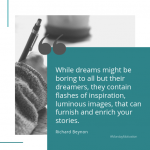