Writing Secrets: How to sustain the fun of writing

New writers often ask whether they ought to be writing “for an audience”.

It’s a complex question because, deep down, we all hope to be read by someone other than ourselves. But when you start writing for some nebulous “audience”, you’re no longer reaching for what is authentic.

You’re writing what you think people want to read and, chances are, you’ll be wrong. It’s hard to predict what people will immerse themselves in. You’re wanting to be “liked”, to be admired, perhaps and, not only does that take all the joy from writing, but it bleeds it of everything that made it worthwhile.

As soon as you’re writing to make people like and admire you, or writing because you think it’s what people want from you, your work loses its greatness.

That’s when you have to, in the words of David Foster Wallace, reclaim the “fun” of writing. But not unadulterated fun, which only ever comes if you have no expectation of another soul reading it.

Here’s what he has to say about it:

Under fun’s new administration, writing fiction becomes a way to go deep inside yourself and illuminate precisely the stuff you don’t want to see or let anyone else see, and this stuff usually turns out (paradoxically) to be precisely the stuff all writers and readers share and respond to, feel.

Fiction becomes a weird way to countenance yourself and to tell the truth instead of being a way to escape yourself or present yourself in a way you figure you will be maximally likeable. This process is complicated and confusing and scary, and also hard work, but it turns out to be the best fun there is.

The fact that you can now sustain the fun of writing only by confronting the very same unfun parts of yourself you’d first used writing to avoid or disguise is another paradox, but this one isn’t any kind of bind at all. What it is is a gift, a kind of miracle, and compared to it, the reward of strangers’ affection is as dust, lint.

advice for beginner writers, how to have an authentic writing voice, how to write 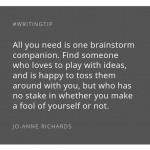 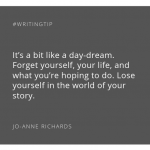 Writing Secrets: Break the rules like an artistJo-Anne Richard's blog, Tips for Writers