Monday Motivation: The challenge of Voice 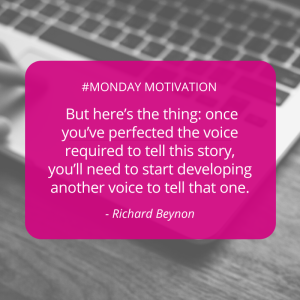 I’ve started off the new year with a close and thorough examination of a list of the four hundred plus literary agents of the United Kingdom – in search of one who’d love to represent an autobiographical novel I wrote some years ago and which I’ve recently resurrected.

The list I’m working off includes some pointers to what at least some of the agents are looking for: what genres interest them, what books impress them, what authors they currently represent.

And, in some cases, what specifically they’re looking for in a story.

The overwhelming feature that agents appear to be seeking is – a powerful narrative voice. It’s more critical than strong characters, more appealing than an intricate plot (although those things are also, obviously important). It’s Voice with a capital V. That difficult-to-define personality of your storytelling.

During our inaugural Writers’ Circle meeting of the year last week, I talked about my trawling expedition – and expanded upon what I mean by “voice”.

It is, firstly, a personality distinctly different from your own – unless you’re writing an autobiography, or a memoir, in which case you’d like to harness your own, considered, voice. That personality is likely to be more articulate, wittier and more expansive than the voice your friends and family have grown used to, because you have more time to find the right word, the wittier riposte, the apt description, than you do in life.

Whatever point of view you choose – first person or third person, closely attached or omniscient – your narrative voice will be, could be, less reliable than you, more flamboyant than you, it could be the voice of a bully, or the voice of his victim. It could be invariably cynical, or hyper-optimistic; orthodox or wildly rebellious.

In short, it will be a degree or two (or ten) more than you are. It will be striking. It will be remarkable, in the sense that readers will be prompted to remark on it. Above all, it will not be timid, or suburban, or beige.

In order to develop this voice, you must be prepared to take risks. And wherever there’s risk, there’s a chance of failure. In fact, the more ambitious your attempt, the more likely you’ll fail. That, of course, is where Sam Becket’s advice is so valuable: “Ever tried. Ever failed. No matter. Try again. Fail again. Fail better.”

But your new narrative voice will inevitably be more and more familiar to you (“Fail better”). And there will come a time when it will be second nature. And those agents will be falling over themselves to represent you.

But here’s the thing: once you’ve perfected the voice required to tell this story, you’ll need to start developing another voice to tell that one.

Are you up to the challenge? 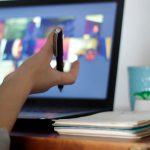 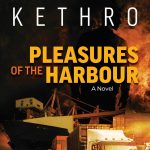 The hidden secrets of writingAll About Writing, Books, Creative Writing Courses, How to write a book, Tips for Writers, writers