I’m a bit tired of my own voice. It struck me recently that you’re always hearing just my view in these blogs.

I do try to draw on the opinions of other writers, as well as the devices used in the books I’ve read. But in a mentoring meeting a while back, it occurred to me that we have developed there a repository of extremely valuable lessons, and that you might find these useful.

In our mentoring programme, we have a number of writers who are either just beginning, in the middle, finishing a first draft or working on a second. I asked a couple of them to share with you what they’ve learnt about writing – and themselves – in the process.

Here’s what Yvette said, in her own words:

I tend to be an impatient person.  People don’t think so. They look at me and think that I’m always calm.  I might be calm, but I’m impatient.  And I’m particularly impatient with myself.  I want to get something done and get it done now.

Cooking has taught me the pleasure of taking things more slowly.  And mentoring is teaching me to do the same with my writing.

I came to writing via economics and business, where getting to the point as quickly and elegantly as possible was considered an important aspect of your work.  Then I started to write short stories and the limit on words reinforced succinct writing.  Tackling a full-length novel seemed like an insurmountable exercise in words and patience.

I have now completed a rough first draft.  I say rough, because the ending needs a lot of work.  I did all the preparatory work – story arcs, character sheets – but I still found myself in a hurry to get the story down.  I glossed over scenes, assuming I would bore the reader.

The mentors were constantly telling me to play it out, to create fully realised scenes in which people were doing and saying things; in which they were noticing details, about themselves and others.

Through the process I realised that the story was in the detail, otherwise your novel becomes one long list of actions, or ‘one damn thing after another’.

But when I saw the end was in sight, I couldn’t resist galloping for the finish line, and so it’s a rushed, garbled affair.

But that’s alright, because now I can relax.  Now I can luxuriate in getting it right, in teasing out the little details, in filling out the scenes, in setting up later scenes. It’s damn hard work, but I’m loving it. 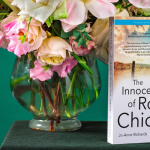 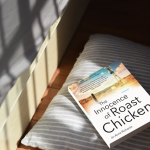 Beware – one book can change your lifeInvitations, Jo-Anne Richard's blog