The devil’s in the detail, they say. The devil, then, has a great deal to boast about when it comes to fine literary fiction, because detail – fine, accurate, precise detail – is the bedrock on which a convincing fictional world, and a cast of fictional characters, are built.

I was reminded of this by George Saunders whose wonderful A Swim in a Pond in the Rain I’ve been rereading.

It’s a close study of a series of classic Russian short stories, with inspired and insightful analysis. In the chapter on Tolstoy’s Master and Man, he turns his searchlight on this sentence:

“‘It is ready,’ said one of the young women, and after flicking with her apron the top of the samovar which was now boiling over, she carried it with an effort to the table, raised it, and set it down with a thud.”

Saunders invites us to consider the difference between that sentence and “The maid carried the samovar to the table.”  Think of all the subtle information presented by Tolstoy. We’re given a glimpse of the weight of the samovar – the woman carried it “with an effort”. It hits the table with a thud. She was clearly carrying it below the level of the table because she had to raise it before she can deposit it on the table.

What is the effect of these additional details that, on one level, don’t appear necessary at all? Another writer might simply have written that first sentence: The maid carried the samovar to the table. That is what happened. But understanding the effort required, the fact that the samovar was filled with boiling water, leads us to understand something about the woman carrying it: that she’s red-faced, that her bouse is probably stained with sweat at the armpits, that she’s not afraid to carry heavy, potentially dangerous household items.

We all know that fiction is lies, that it’s invented, that it’s the product of the imagination of the writer. We’re aware of this even as we set out to read a story that we know never took place, involving characters that never existed. And so it’s the writer’s duty to do everything she can to overcome this essential scepticism.

“… (W)e like it,” Saunders remarks, “when a story agrees with our sense of how the world works. It gives us a thrill, and this thrill-at-truth keeps us reading. In a story entirely made up, it’s actually the main thing that keeps us reading.”

So never overlook the opportunity for one of your characters to flick her apron, or dab his handkerchief, or finger his mole, or brush the dust from a chair before taking his seat. 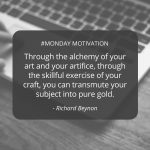 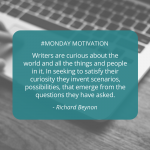