Monday Motivation: The terror of sharing your writing

The dough of a particular variety of wholewheat bread is almost liquid. It slips between your fingers, it makes unexpected lunges for the edge of your working surface, it resists any attempt to shape it. It induces in the neophyte baker something closely resembling terror – that things will go wrong, that nothing you do will control the material under your hands. It seems impossible that you’ll ever tame this bubbling mass of flour, water and yeast.

Patience, says our teacher, the breadmaker. Take it slowly, commit yourself to the dough, but treat it with tenderness and respect.

So you persist, and scoop the sticky mass up and over and fold it towards you, over and over. In time it develops a kind of amoebic skin and starts to behave itself.

As I pointed out a few weeks ago, everything the breadmaker says seems to be pertinent to writers and writing.

During the course of the workshop, he gives us a different kind of insight into writing. In his youth he studied acting, he tells us. He enjoyed the experience of slipping into another character’s skin, of exploring what it meant to be someone else. This gave him extraordinary freedom – freedom to explore a different mode of being and, more important, freedom from self-consciousness.

If people laughed at the naked figure on the stage, it would be his character under attack, not him. His character might feel embarrassment or shame, not him.

In the second year of his degree he, along with all his classmates, was required to do a little creative writing. He chose to write a poem, and spent days agonizing over it. He chose a complex subject, and struggled to make his writing clear.

Finally, when it was done, each student in the class read out the submission of their neighbour. His turn came. He sat and listened to the lines that he’d labored over for so long. It was, he says now, the most excruciating experience of his life. He was filled with terror of the most abject kind. Every word seemed to rebuke him, every line sounded desperately incoherent.

We’ve all experienced the terrors of having our work read by others. Sharing the most intimate revelations of our hearts can be quite terrifying. And even if the subject of our labours has nothing to do with our most vulnerable selves, we fear that little mistakes of grammar, punctuation or simple expression will expose us as the frauds we fear ourselves to be.

All I can do is repeat the words of the breadmaker: Be patient. Commit yourselves to the task and work both tenderly and with respect for your subject. In the end the dough that began as a sticky mess will emerge fully structured and scrumptious from the oven. And your manuscript, to your surprise and delight, will be cause for quiet, (or noisy) celebration. 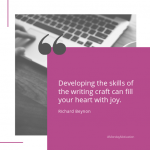