Monday Motivation: Succumbing to the infinite charms of Venice

Six years ago I sat at a table at All’Armoria, a restaurant perched on the lip of the quay overlooking the

Guidecca Canal in Venice enjoying the late summer sun and a fine Campari spritz. While thus engaged, I contemplated the imposing edifice of Santa Maria del Rosario, a church built in the first half of the eighteenth century on a foundation of hundreds of stakes hammered into the mud flat on which Venice is built.

Now, on a chilly day in late January, I found myself just a few metres down the fondamenta, at another restaurant, enjoying the last rays of a wintry sun. I was again looking at the church, and, inspired perhaps by the spritz on the table before me (I am, it seems, a creature of habit) my thoughts again turned to those timber foundations.

Hundreds of stakes, each four metres or so long, hammered painstakingly into the ooze. Each of these stakes on its own did not provide much support. I dare say that dozens of them would, likewise, not have done the trick.

But when they stood side by side in their seried ranks, each supporting those flanking it, and being supported in their turn by their neighbours, they were able, collectively, to support the enormous weight of the church built on top of them. Have a look at Santa Maria, rising high above the other buildings of the neighbourhood. It must weigh thousands of tons.

When a writer sets out to create a world – or a character – she does so just as the builders of Santa Maria did, by hammering in one stake, one pile, one detail at a time. None of these on its own is enough to sustain the world being evoked, but together they’re up to the task.

By the time they’re all in place, the illusion is complete – and the foundations of your world invisible.

Looking at Santa Maria Rosario – or any of the hundreds of other wondrous buildings here, some much larger and elaborate than this particular church – you’re not aware of the legerdemain that underpins them and the scrupulous attention paid to the engineering.

What you admire is the whole, that extraordinary classical building which houses some of the most admired paintings in all of Venice by Tiepolo, Piezzetta, Ricci, and Tintoretto.

Get the underpinning right, and you can do whatever strikes your fancy on that foundation.

As I write these words, the noon chorus of bells sounds out across the city, and I suspect that I, like hundreds before me, have succumbed to the infinite charms of Venice.  Perhaps I’m looking for writerly analogies where none exist, simply because La Serenissima is so inspiring.

Happy writing wherever you are,

P.S. Trish and I are on a scouting trip, seeking – and finding – a new and utterly charming venue for our September retreat here. If you’re interested in joining us – after two years of exile thanks to you-know-what – do check out the details at https://allaboutwritingcourses.com/venice-retreat/ 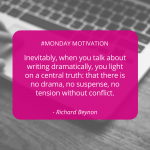 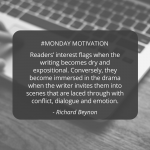