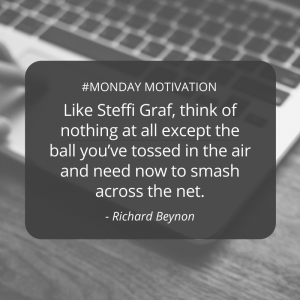 Here’s a small thought that occurred to me during a conversation with a stranger on a train platform at St Pancras Station that might help to banish the spectre of self-consciousness from your writing practice.

The conversation came round to tennis, and my interlocutor remarked with great enthusiasm on the single-mindedness of the great players.

“Take Steffi Graf,” he said animatedly, miming her serve. “When she tossed that ball in the air and brought her tennis racket down on it, what do you imagine she was thinking about?”

“Winning the point?” I suggested tentatively.

“Maybe the championship?” My guesses were getting wilder and wilder. Who knows what filled Steffi Graf’s mind at a moment like that.

“Think about it,” my platform companion said intently. “Ball’s in the air. The stadium’s hushed. Every muscle in her body is focused on the next few milliseconds.”

The man had a gift for setting the scene, I’ll grant him that.

“But her mind was filled with… nothing. All of her life had come down to that moment, to that sharp point of ensuring her racket hit the ball just so… Total focus. Total concentration. The championship? Forget it. The game? Forget it. Even the point is… beside the point.”

And because my mind is attuned to writing and the peculiar challenges that face the writer, I wondered what application these thoughts had to writing. And it struck me at once that they are very germane to the subject.

When you’re composing a sentence… or rehearsing a line of dialogue in your mind. When you’re grasping for a phrase that perfectly captures the expression on your antagonist’s face. When you’re shaping a scene around its dramatic imperative…

You shouldn’t be thinking of the bigger issues: the themes of your story, the climax that you’re working towards, and so on.

You should be focused on that one thing: the best word, the most economical link between X and Y, that perfect phrase.

We so often talk about immersive scenes in which your reader can sink into the reality of the world you’re creating. We don’t as often consider the fact that writing is itself an immersive activity in which you can submerge yourself. And, like Steffi Graf, think of nothing at all except the ball you’ve tossed in the air and need now to smash across the net.

I became aware that something was trying to attract my attention. It was the man on the platform. 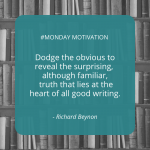 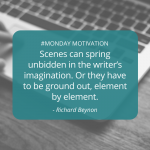